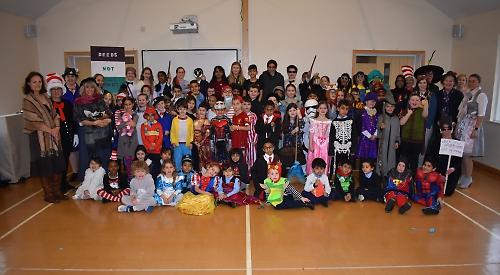 FANTASTIC Mr Fox and Ant-Man were among the costumes worn by pupils at Hemdean House School in Caversham to mark World Book Day.

About 80 children dressed as their favourite literary characters and some of the older pupils read stories to the younger ones.

Many also devised their own and shared books.

Niamh O’Brien, eight, wore a blue coat as Mary Poppins while Eva Peirce, 11, dressed as a suffragette from Suffragette (My Story) by Carol Drinkwater.

She wore a sash on which the words ‘Votes for Women’ appeared and created her own placard, which read ‘deeds not words’.

“I chose it because I’ve always been interested in the suffragettes and my great, great grandmother was one. She was called Martha.”

Headteacher Helen Chalmers, who dressed as professor McGonagall from Harry Potter, said the day was a way to help children read more.

“I think it’s important to bring stories to life,” she said. “They were all looking forward to it and every single pupil and teacher dressed up. The older children have been reading to the younger children and we always like dressing up. It’s been quite fun being one of the heads of Hogwarts.”