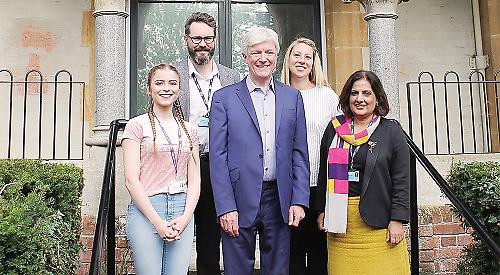 Lord Hall, who lives in Henley, visited the college on Monday as a record number of new students enrolled.

He learned about what the college offers students as well as its plans for a college radio station and a revamp of its TV studio as well as a range of community projects backed by the Mayor of Henley. Principal and chief executive Satwant Deol, a computer scientist, also outlined proposals to attract more young women into science and technology subjects.

She told Lord Hall that the college’s success rates were now better than ever and how 90 per cent of former students who go on to Russell Group universities achieved a first or a 2:1 in their degrees, which compared with 86 per cent of students from independent schools. Lord Hall said: “I have really enjoyed the sense of energy about the place and the plans for the future are very exciting. Henley should be very proud of what the college has achieved and will achieve in the future.”

He pledged to return to talk about supporting the development of the college’s creative and technology offerings for students.