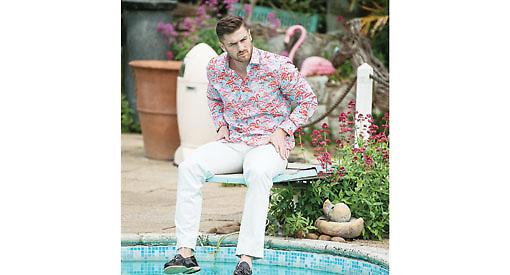 HOCKEY player Jeremy Hughes has been around rowing since he was a small boy.

His mother, Judith Burne, rowed for Great Britain at the 1986 Commonwealth Games in Edinburgh, winning gold in the lightweight coxless fours, and also won a world championship silver.

Jeremy, 24, of Chiltern Close, Henley, says: “I’ve been going to the regatta since before I can remember.

“It has always been a fairly big event for the family. We’d have people from South Africa or Australia staying at our house.” Jeremy didn’t follow his mother into rowing and instead plays for Henley Hockey Club but he still enjoys going to the regatta.

“I like the dressing up and trying to be fancy, I guess,” he says.

He typically wears a shirt and smart shoes and he likes pastel colours.

Jeremy, who works in the café at the Regal Picturehouse Cinema in Boroma Way and plays for Henley Hockey Club, also likes the “buzz” of the town during the regatta.

“People from all over the world come to the town and there’s so much fun, especially at night,” he says.