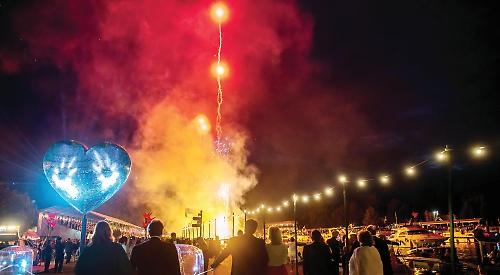 CLASSICAL music will return at next year’s Henley Festival with a “world-leading” act performing on the final night.

The traditional fireworks display, held at the end of each night, will also be back instead of the pyrotechnics show held this summer.

The organisers say they are responding to feedback from festival-goers.

“We never said we would not be doing classical anymore but we’re in a position to say ‘we’re doing a classical evening in 2018’ because of the way the programme is coming together.”

The full line-up will be announced in January but Ms Geeves said: “I would say they are nationally and internationally known, a world-leading classical act. There will be a full orchestra on stage and singers.

“I’m really excited about it. I think it will be a beautiful close to the festival, a really magical and special evening.”

Ms Geeves, who has run the five-day festival since 2015, said the move was in response to an audience survey carried out in the summer which showed people wanted classical music or for the event to at least have a classical influence.

“We listen to our audience and we want to give our audiences what they want,” she said. “I think this will be well-attended because they have asked for it.”

She said the absence of a classical act at this year’s festival was to do with the availability of acts.

This year’s fireworks display will return to Fawley Meadows on the opposite side of the river to the “floating” stage and will be bigger than the pyrotechnics at this year’s festival which took place either side of the stage.

The organisers say they have again listened to their audience and have asked fireworks company Titanium for a more traditional display with “a lovely twist”.

Ms Geeves said: “It will be a high aerial firework display and will be longer than it was this year.

“We have worked with our health and safety consultants to ensure we’re following the guidelines.

“The most important thing for us is our audiences’ safety and, ultimately, their enjoyment of the festival.”

The festival is also introducing a special season ticket for people living inside the RG9 postcode, which includes Henley and the surrounding villages.

This will allow general admission to all five nights of the festival for £150 compared with the regular price of £245.

Three hundred discounted tickets only will be available from 10am on Monday for a limited time only.

Ms Geeves added: “We have an incredibly loyal audience and we have a big chunk from the RG9 postcode so this is a ‘thank you’.”

If you would like to buy an RG9 season ticket, visit https://tinyurl.com/ybdv7t2a