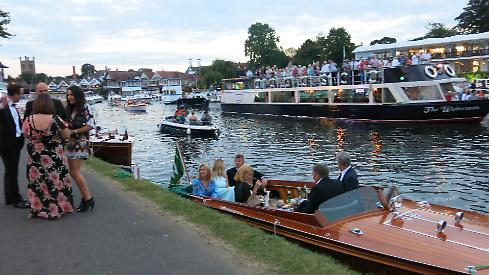 CAMPAIGNERS are protesting at the closure of a section of the Thames Path during next year’s Henley Festival.

Every year since 1998 part of the path has been diverted to allow for the construction of the festival’s “floating” stage, where the headline acts perform.

Wokingham Borough Council has again agreed to allow the temporary closure next year.

The Open Spaces Society, which is based in Bell Street, Henley has objected, as it does every year. It claims the closure is unnecessary and affects walkers and tourists.

General secretary Kate Ashbrook said: “We are dismayed that once again the festival wants to shove walkers off the Thames Path National Trail.  These walkers include visitors from all over Britain and from overseas who come here for a quiet walk by the river.  Instead, they are pushed around the back of the marquees with no view of the river at all.

“This year the festival is seeking an additional four-hour closure on , a popular time for walkers.  We have been given no justification for the extra hours, nor indeed for closing the path at all.

“For many years the festival operated successfully without closing the path for such long periods. The Thames Path National Trail, which is of international importance, should not be interfered with merely for a private event.

“The council must have regard to the safety and convenience of alternative routes but the proposed alternative route is not a public highway and therefore users do not have the necessary protection.

“The only alternative highways are ones which result in people walking a considerable extra distance or risking Remenham Lane, which is longer and dangerous/ The council should be bold and say ‘no’ to the closure.

The festival says the closure is necessary to protect the public during the build and dismantling of the stage for safety reasons and during the festival for logistical reasons.

Chief executive Charlotte Geeves said: “‘The festival puts a diversion in place for health and safety reasons throughout the build and de-rig of the main stage, which is a necessary requirement and protects the general public.

“The footpath is then opened up during the daytime and only diverted 15 minutes prior to the gates opening for the festival’s public ticketed event.

“The towpath is then opened again as soon as the festival is finished each evening.

“The Henley Festival is a not-for-profit organisation and is supporting the Teenage Wilderness Trust and the Charlie Waller Memorial Trust through our grant programme.”