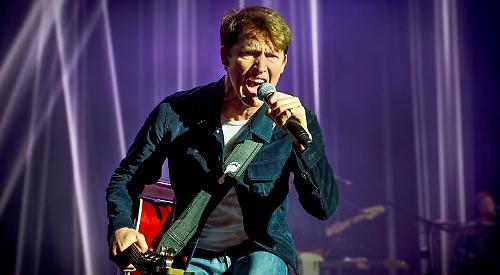 THOUSANDS of people gathered at Henley Festival last night to dance along to James Blunt as he headlined the second evening on the “floating stage”.

It was the first time the You’re Beautiful singer has ever performed in Henley. He opened the show with How It Feels to Be Alive and performed others hit such as Wisemen, Beautiful Dawn, 1973 and Bonfire Heart.

The 47-year-old also performed his newest single, Love Under Pressure, live for the first time since its release last week.

Speaking after his performance of Champions, Blunt said: “This is the poshest thing I’ve ever played at.

“There’s no need to get dressed up just for me, this is very exciting. My band are excited, this is the hottest audience they’ve ever played to.

“We’ve waited 17 years to be here and everything else has just been practice until we got to you guys.”

The audience sang along to Goodbye My Lover and were on their feet dancing for the last nine songs including his 2005 hit, You’re Beautiful.

Blunt had his Henley friends in the crowd including his young goddaughter, Ivy, who he brought on stage at the end to bow with the band.

Before the headline act, festival-goers enjoyed bottles of champagne by the Thames and tucked into food from numerous vendors as they watched in-house performers sing, dance and ride unicycles throughout the Lion Meadow grounds.

Sophie Ellis-Bextor will be headlining the festival tonight. There will also be a disco-themed evening tomorrow, featuring Kathy Sledge from Sister Sledge.

For full coverage of the festival, see next week's Henley Standard.