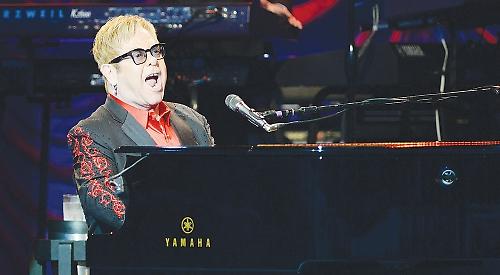 THE Henley Festival has won an award following this summer’s performance by Sir Elton John.

The show was crowned headline performance of the year in the UK Festival Awards, which were presented at the Camden Roundhouse in London on Monday.

It was up against several other high-profile performances including Rihanna at the V Festival and Calvin Harris at the Creamfields dance festival in Cheshire.

The festival was also shortlisted in the best hospitality category, which was won by heavy metal event Download following a public vote.

Artistic director Stewart Collins attended the awards ceremony and was presented with a certificate.

Sir Elton played for a sell-out audience of 7,000 people on the opening night of the festival in July.

His set opened with The Bitch is Back and closed with The Circle of Life and Can You Feel The Love Tonight? from his soundtrack to Disney’s The Lion King. It also included I Guess That’s Why They Call It the Blues, Goodbye Yellow Brick Road, Rocket Man and Your Song.

The singer performed alongside his original drummer Nigel Olsson and guitarist Davey Johnstone.

The festival’s chief executive Charlotte Geeves said: “We’re obviously thrilled at the news. It’s not only good for the Henley Festival but for the town as a whole.

“It was entirely fitting that Stewart collected the award as he had been working for three years to secure Elton.

“He texted me the good news and it came as a complete surprise as we were delighted to have even been shortlisted.

“We were up against some really big-hitting festivals so this is a massive boost to our credibility and will make us a more attractive prospect for both artists and audiences. It’s something to be very proud of.”

Next summer’s festival will take place from July 5 to 9 and, for a limited time, a £199 season ticket is on sale which grants access to all five nights for the price of four. Buyers from the Henley area will also get a free glass of champagne.

The first line-up announcement will be made next month, when regular tickets will go on sale.