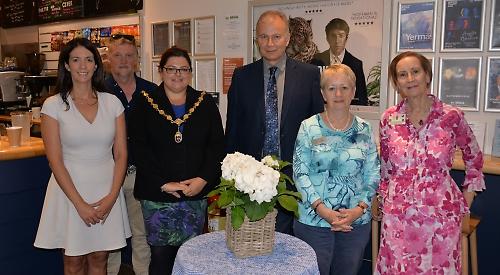 HENLEY was judged for the Thames and Chilterns in Bloom competition today (Thursday).

Judges Julie Graham and Peter Goff were given a two-hour tour of the town by members of Henley in Bloom.

“The bloom initiative is well established in Henley and everybody wants to be a part of it,” Mrs Graham said.

“Bloom is involved in every project and when they are planning a new development bloom is part of it.”

The tour began at the Regal Picturehouse, in Boroma Way, where Henley Mayor Kellie Hinton gave a presentation on the work done by the group this year.

Some of the highlights of the tour included a boat trip on the Thames as well as projects at Mill and Marsh Meadows and Badgemore Primary School.

After the tour the judges were joined by about 20 volunteers who help Henley in Bloom for lunch at the Station House, in Market Place.

She said: “We’re lucky to have so many treasures around the town. We’re strong as a community and hopefully we managed to demonstrate that.”