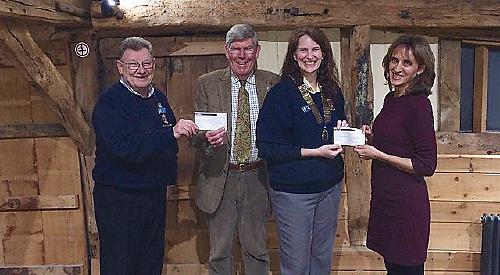 Henley Lions Club has presented two charities with a total of £3,000 that it raised with its Santa’s Grotto at the Toad Hall garden centre in December.

The money was shared by the Chilterns Centre for disabled children in Henley and the Footsteps Foundation in Dorchester-on-Thames, which provides physiotherapy programmes for children and young adults.

The money was presented at the Lions’ March meeting by club president Wendy Franklin and member John Moore to Paul Barratt, chairman of trustees at the Chilterns Centre, and Tina Jacobs, a trustee of the Footsteps Foundation.

Mr Barratt thanked the members, point out the amount of work and time they had spent raising the money. Mrs Jacobs said the money would pay for three weeks of physiotherapy for one child with cerebral palsy.

Mr Moore said last year’s grotto was the most successful yet with almost 1,000 children visiting Santa and his elves and helpers over the four weekends before Christmas. “We really enjoy this event and appreciate all who travel to visit and make it possible to donate to such great children’s charities,” he added.