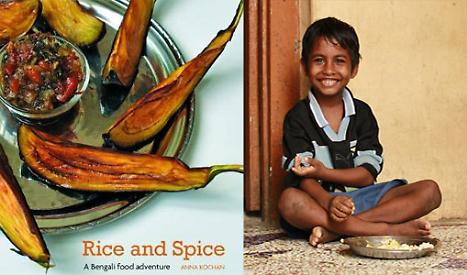 At most literary festival talks, an interviewer asks an author some questions about a book; the format of A Night in Calcutta was somewhat different.

Billed as a celebration to mark a new partnership between Henley Literary Festival and the Apeejay Kolkata Literary Festival in the state of West Bengal, (a partnership funded by a grant from the British Council), it brought together author Anna Kochan, author of Indian cookery book Rice & Spice – a Bengali Adventure, Apeejay Festival director Anjum Katyal, and the founder of Future Hope, a charity that rescues children from poverty and peril on the streets of Calcutta,Tim Grandage.

Henley Literary Festival director Sue Ryan, who herself grew up in Calcutta, brought it all together by explaining how the three speakers were interlinked and asking about their experiences and favourite places in Calcutta.

After that, each speaker gave a short presentation about their particular area of expertise.

Anjum Katyal spoke about the Apeejay Kolkata Literary Festival, an annual event that nourishes Calcutta’s enthusiasm for literature and the arts, and is free for all to attend.

It started in 2010 at the Oxford Bookstore, in the heart of the buzzing, cosmopolitan city centre, and now features a wide range of writers and artists from India and beyond.

Whilst working in a bank in Calcutta 30 years ago, Tim started helping street children by sheltering up to 40 at a time in his two-bedroom flat and pulling strings to get them free medical treatment.

His charity now houses nurtures, and educates around 250 children until they reach independent adulthood with skills, qualifications and confidence.

Anna Kochan told us how she got the recipes for her Indian cookery book, by voluteering at Future Hope for six months. There she watched the cooks working and wrote down their recipes.

Despite the language barrier and the challenge of converting quantities from bulk catering to family meal sizes, more and more dishes were tried, spices were blended, traditional recipes were shared and the kids came into the kitchen to tell her about the foods they liked to eat too – curries, breads, dals, chicken and vegetable dishes.

Anna returned to the UK with 80 authentic Bengali recipes which, when she tried cooking them at home, turned out remarkably well.

The talk closed with some short video clips of the cooks and boisterous mealtimes at Future Hope, and the children talking about their favourite foods.

It was heart-warming to see the once-destitute kids now laughing, healthy and full of spirit.

All the questions in the Q&A session at the end were about Tim’s charity, which unbalanced things slightly – I wanted to hear more about Anjum’s festival and Anna’s book as well – but overall, A Night in Calcutta was an interesting and inspiring event.