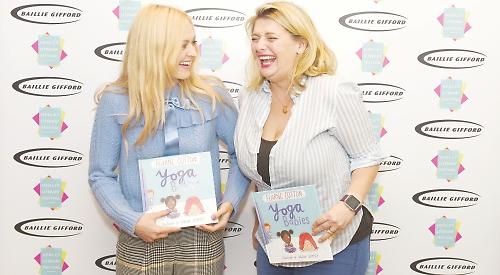 THE Henley Literary Festival celebrated its 11th year with a host of star names and record-breaking ticket sales.

Organisers hailed the week-long event, which ended on Sunday, as the best yet.

Programming director Tom Ryan said: “It was amazing and there was a buzz around the town. We’re really, really pleased.”

The total number of tickets sold for the 160 talks and events was more than 22,000, up more than 3,000 on last year’s previous record figure, and there were 60 sell-outs.

Among the most popular events was Princess Michael of Kent’s appearance at Phyllis Court Club on Friday. 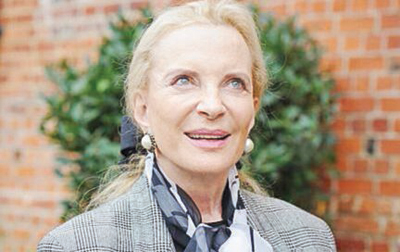 She discussed her book, A Cheetah’s Tale, which recounts her visit to Africa in the Sixties and raising a cheetah cub that she named Tess.

The princess, who was then 17, said that at the time women were expected to wear clothes that covered them but she didn’t like wearing long sleeves so she rolled hers up and got a tan in the process.

“I looked like a chicken sandwich, half white, half brown!” she said.

On her first safari, she inadvertently ate snake for dinner.

The Princess explained: “I was a little nervous because we’d run over a snake, a mamba, on the way. There were snakes everywhere and I’m not good at snakes.

“Dinner was delicious, so I asked what we’d eaten and he said, ‘that’s the mamba we ran over on the way!’ I was in the bushes right away.”

During the trip her father saved her life after shooting a lioness that had been on the prowl one night while she was asleep.

The Princess recalled: “She had apparently been looking at me and I might have been breakfast. That was really quite a fright.”

She first encountered Tess after the cub’s mother had been caught in a trap and her father had been forced to shoot the animal to put her out of her misery.

“When we turned the body over she was lactating,” said the Princess. “We found a tiny cub, her eyes not yet open. My father said, ‘here you go, this will give you something to do.’ I knew nothing about bringing up a baby cheetah. I knew there was a very good chance she wouldn’t survive.

“My father said very firmly, ‘this is not going to be a pet, this is going back to the wild when she’s ready, so don’t kiss and cuddle her’. That didn’t last long. I don’t think I looked after my children nearly as well as I looked after this cheetah!”

The princess, who spent almost two years raising Tess and preparing her for return to the wild, also told the audience that she believes zoos do have a place in today’s society.

“We’ll never pay to look after the animals if we never see them, so zoos serve a purpose in that respect,” she said. “I think they do have to be large conservation areas.”

Among a number of politicians to appear at the festival was Liberal Democrat leader Vince Cable, who also spoke at Phyllis Court Club. 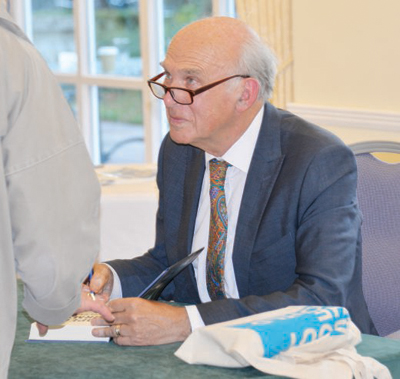 He took the opportunity to criticise Foreign Secretary Boris Johnson in his former constituency, accusing him of behaving “very, very badly” over the Brexit issue and undermining Prime Minister Theresa May.

Mr Cable said: “He’s a formidable politician and managed his Mayor of London role extremely well. He has some great personal qualities — he’s very funny and comes up with great off-the-cuff remarks.

“But ever since the Brexit referendum I think he has put his country and his party behind his own personal ambitions. It’s so transparent now.”

The former business minister in the coalition government also said he hadn’t given up on the idea that Britain “could go back on Brexit”.

Mr Cable explained: “I can’t see a good outcome as the simple fact is that we’re disconnecting from the biggest market in the world and giving up something tangible in the vague hope that deeper relationships will spring up with other countries.

“However, we already know that other countries like India aren’t interested in a special relationship with the UK.

“Donald Trump is highly capricious with a limited attention span and it’s wishful thinking to assume he will lead the way to better trade agreements.

“We could have a second referendum or the more moderate people could arrange a long, transitional agreement so that in five years’ time we’re still effectively in the EU under a different name.”

Mr Cable said he had sympathy for Mrs May following her speech at the Tory party conference last week, where she struggled with a persistent cough and was ambushed by a prankster with a mock P45.

“I genuinely felt for her,” he said. “I may have been critical in the past over certain issues but she has some genuine personal qualities and the way she’s been hammered by her own party over the last few weeks is grossly disloyal and childish.

“In many ways, that made me sympathetic as she’s better than she’s been given credit for.”

Mr Cable said he had chosen to write a fiction book, Open Arms, as he was in “political exile” and semi-retirement at the time.

He explained: “Four months ago I had absolutely no expectations and had settled into a nice lifestyle, lecturing at universities, writing books and doing regular dancing tournaments in Blackpool.

“When the election came around, my local party asked me to stand because of my name and I got elected by a thumping majority, which was a surprise.

“I had no idea that the leadership would come up and I hesitated to take it as I knew it would be a change of gear. However, the thought of us as a viable alternative to two extremes was very tempting and I felt I was up to it.”

Fearne Cotton gave a yoga demonstration when she appeared at Phyllis Court Club. 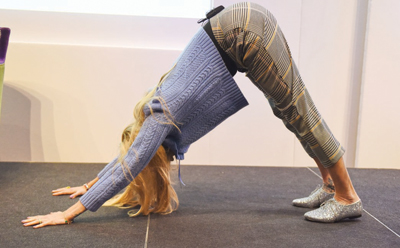 The broadcaster was talking about her children’s book, Yoga Babies, when she showed the audience the downward dog pose.

Cotton, who has two children, Rex and Honey, with husband Jesse Wood, the son of Rolling Stones guitarist Ronnie Wood, was in conversation with journalist Bryony Gordon about the book and the benefits of yoga.

She said: “When you think about kids doing yoga you think ‘you’re a bit of a k***head!’. The book had to be realistic. I’ve probably been more focused in the last four or five years, especially since having kids, on doing lots of things that make me feel really good.”

Cotton, 36, said she wasn’t ready to write her life story yet.

“I think you’ve got be 86 to write an autobiography or have had a very colourful life,” she said. “To have any semblance of a private life, or normal life, I’ve got to keep some stuff back.”

She revealed that she had kept a diary every day from age seven to 20, but added: “I got to about 29 and I felt huge pressure from them. I burnt it all, the whole lot, every single diary.”

Cotton said that after more than 20 years working in showbusiness, she cited working with Sir Terry Wogan on Children In Need for 12 years as the highlight of her career.

She called the radio and TV presenter, who died in January last year, “one of a kind” and said he couldn’t be bettered.

“There’s no way I could have worked with a better individual — he was the perfect broadcaster,” said Cotton. “I learnt so much from working with him and he was so kind and so brilliant. I was devastated when he passed away.”

There was another sell-out audience at Phyllis Court Club for the appearance of former England spin bowler Phil Tufnell, who is now a cricket pundit. He gave his opinion on the Ben Stokes controversy following his alleged involvement in a brawl outside a nightclub.

The all-rounder will not be considered for England’s Ashes tour of Australia this winter until after the police investigation.

Tufnell said that everyone, including the selectors, should wait for the outcome and warned that if Stokes did travel down under he would have to be managed on and off the field as people would be “after him”.

Journalist and broadcaster Jeremy Vine claimed that children today were “over-entertained” and could benefit from experiencing boredom. The BBC Radio 2 presenter recalled his own childhood in the Seventies building paper aeroplanes and playing in treehouses because life was dull and his family owned only one record. 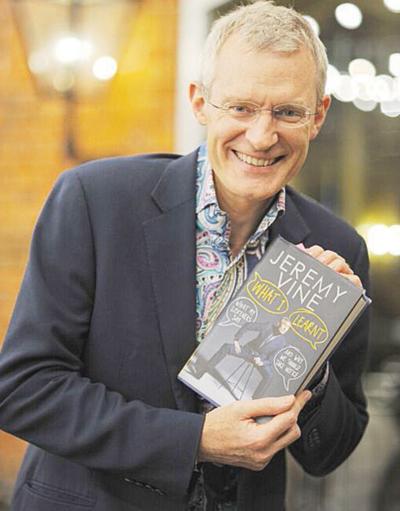 Modern entertainment, by contrast, was much better and this made it “very difficult” to experience boredom.

He told the Daily Mail: “I met a parent the other day and their child was carrying a tennis racket and a cello, so they are going to a game of tennis and a cello lesson. I thought, ‘that’s too much’. Boredom is good, boredom fires the imagination.”

Asked if he thought it possible to be bored today, he said: “It’s very difficult. The TV I was watching when I was eight was c**p, but that was good because I quite often turned it off. The level of broadcasting is so much higher now… but it means we are being over-entertained. Bring back boredom.”

Meanwhile, fellow TV presenter Kate Humble claimed that people who live in the countryside and do practical work were “belittled” by those who live in urban areas.

Humble, who is a former president of the Royal Society for the Protection of Birds, said that attitudes towards the countryside were “disparaging” and innovations which came from animals and nature were often ignored because of a dismissive view of the natural world and were seen as “cranky nonsense”.

She said: “A lot of people are very disparaging about people in the countryside full stop. They think they spend lots of time leaning on gates chewing on bits of straw and doing not much else.

“And actually the countryside is full of people innovating and being incredibly inventive, partly because a lot of the time we don’t have the resources and the facilities that people living in towns do.”

She tweeted: “Dame Kat in the Hat. Aka Oprah Grainger. Fab interviewer.”

Mr Ryan, who is the son of the festival’s founder Sue, said: “We have had some great novelists and children’s writers but also comedians and sports stars.

“All the comments we received were really positive. Like all British people, I’m not great at taking compliments but I have had to get used to it!

“It’s nice that people get to see things they might not have had a chance to see in Henley before.

“We’re still able to have the same audience that we did at the start 11 years ago but equally we’re bringing in new, younger audiences at the same time.

“I’m hoping we can continue the relationships we have with the venues, publishers and our audiences to build on that.”

Mr Ryan said he had particularly enjoyed listening to Pointless
co-presenter Richard Osman, adding: “I just couldn’t leave because it was so funny.”