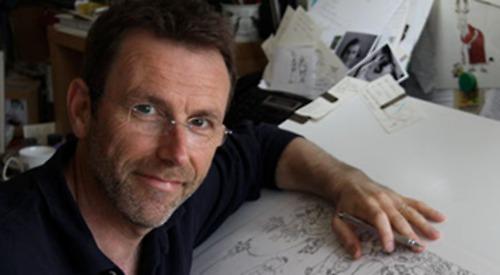 RAIN didn’t keep parents or children away from one of the first events of the literary festival, with David Melling introducing the very sweet character of Ruffles to an eager audience.

Ruffles, a very cute dog, is Melling’s own creation, inspired by a childhood pet. Describing himself as an illustrator first, then a writer, Melling enthusiastically began his talk explaining how he came up with Ruffles, who he said at first was too “anthropomorphic” — and so then the editing process began with a series of hand-drawn sketches through to finally finishing Ruffles using computer animation.

Engaging at all times, Melling captured a very young audience’s attention and despite the event lasting almost an hour the children — and parents! — were all quiet and well behaved.

With an even split, it was a good chance to introduce his new book, Ruffles and the Teeny, Tiny Kittens, a very endearing story which at its heart teaches the importance of sharing.

In the spirit of sharing, perhaps the highlight of the event was the art class. Melling slowly guided the children through his method of illustration, teaching them how to draw their own interpretation of Ruffles.

The level of concentration was impressive. My own five-year-old was busy copying every mark he made, mirroring his colouring, sketching and then proudly holding up her version of Ruffles for everyone to see.

Even my one-year-old managed a few scribbles and, though not very dog-like, they were well intentioned and she got the idea we were all supposed to be drawing.

During the event, we were treated to not only an art class but two stories. As well as the aforementioned Ruffles and the Teeny, Tiny Kittens, Melling read from his other book, Ruffles and the Red, Red Coat.

It made my daughter and many of the young audience laugh — they could sympathise with the poor dog’s battle against wearing a coat!

That feeling really summed up the event: it was personal, relaxed and, despite the age range of the audience, very calm.

As Melling told us, drawing should always be fun, and on Saturday morning it certainly was. I for one was pleased I had ventured along the autumnal river to the museum for such a charming event.

In fact, as Ruffles did in the book, by splashing in puddles — of which there were many massing outside the museum — it was even tempting to embrace our creative sides, act like children and draw without inhibition.