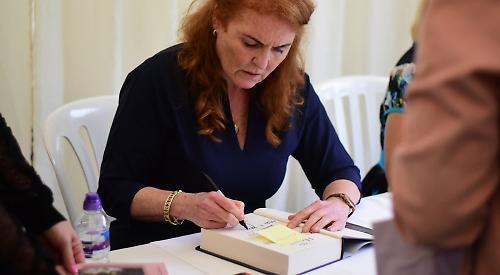 THE festival’s green room at Hotel du Vin saw a most incongruous coupling when Sarah Ferguson, Duchess of York, arrived at the same time as rock icon and Sopranos star Stevie Van Zandt.

The pair happily posed together for a photograph.

When Van Zandt shared this on Twitter one follower enquired, “What the **** is happening here” to which the E Street Band guitarist responded: “Henley Literary Festival: Cool people only.”

GILES TERERA, who won an Olivier award for best actor for his portrayal of Aaron Burr in Hamilton, appeared at Christ Church.

Afterwards, he joined drama students from St Helen & St Katharine School in Abingdon for an impromptu, a capella version of The Room Where It Happens from the West End hit show.

FORMER Children’s Laureate Chris Riddell captivated an audience of all ages with a mix of live drawing and poetry.

When it came to the question and answers section, he said he would try to answer the questions with an illustration.

The first query from a young fan was, “What’s the hardest thing for you to draw?”, which prompted a big laugh. The answer: bicycles.

THE redoubtable Ruby Wax was walking in the pitch dark after her sparkling talk at Phyllis Court Club when she decided that a swim in the Thames would be a great idea.

Rudy, a wild water enthusiast, was advised gently that she didn’t have a costume but she responded that she only needed a towel.

However, the idea was soon forgotten when it was realised her phone was missing and a search was required.

ON Saturday, two of the oldest and most respected figures took to the stage.

Lady Antonia Fraser (she is also a dame) talked about her latest historical book, The Case of the Married Woman.

The 88-year was as alert and dignified as ever.

The former Henley MP was in conversation with the Financial Times’ Whitehall editor Sebastian Payne.

He drew applause when he called the Brexit vote “the worst decision in my lifetime”.