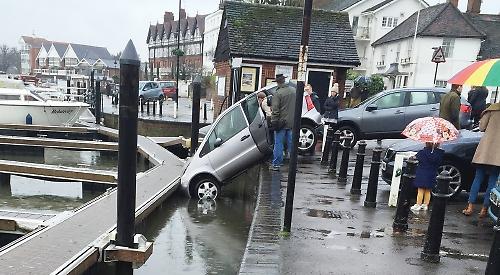 TWO passers-by rescued an elderly woman from her car after it ended up in the River Thames in Henley.

The front of the Mercedes hatchback dipped into the river after the driver accidentally went over the edge in Thames Side, near the junction of Friday Street, at about 3.20pm on Sunday.

The car uprooted a metal bollard and would have plunged in fully had it not been wedged by a pontoon a few feet out into the water. Bystanders called 999 while the two men rescued the woman, who was in her eighties, by lowering her front passenger seat and pulling her to safety through the rear passenger side door.

She was safe by the time a fire engine and an ambulance car arrived, accompanied by the police. She was shocked but unhurt.

Officers and firefighters closed the road for more than two hours while they checked the scene was safe and recovered the Mercedes.

Rob Powell, of Cromwell Road, Henley, who is a chef at Shaun Dickens at the Boathouse in Station Road, said: “People walking past had seen what happened and were keen to get her out because, bless her, you could see on her face that she was very shocked.

“It’s very lucky that the pontoon was there because God knows how it would have ended up if the car had gone into the water.

“It looks like she may have tried to reverse out of a parking space but put the car into first gear by accident. There were about a dozen people watching and we were so relieved when they got her out safely. It could have been so much worse.”

A similar incident occurred in August 2012 when a runaway Toyota hatchback rolled backwards down Station Road and ended up rear-first in the water at the Hobbs of Henley boatyard. The empty car had been parked and it’s believed the handbrake malfunctioned.

A car also plunged into the river outside the Little White Hart pub, now Thameside Apartments, in 1983.