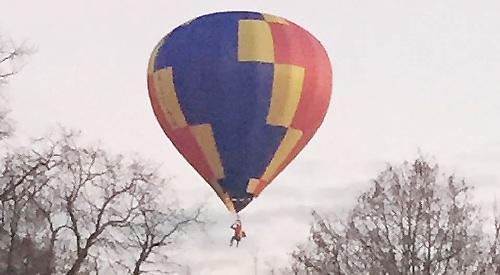 ONLOOKERS were stunned when a man flying a hot air balloon without a basket touched down in a Henley street.

Mark Shemilt landed in Valley Road as pupils were making their way home from the nearby primary school.

He was travelling in a Cloudhopper one-man balloon in which the pilot sits in a harness with a gas tanker on their back.

The gas powers the flame that keeps the balloon afloat and can be adjusted to control altitude.

Mr Shemilt, 52, of Mill Lane, Henley, normally gives tours in the Virgin hot air balloon which flies over Henley from a launch site in Harpsden.

He uses the Cloudhopper for pleasure and to keep up his skills during the winter, when the weather is too unpredictable for tourist flights.

It is smaller than a regular hot air balloon and can reach speeds of up to 30 knots, or 35 miles per hour.

Mr Shemilt was flying over the town on Wednesday afternoon last week when he realised it was too dark to continue so decided to land.

As he neared the ground, he called out to parents and their children in Valley Road to warn them that he was approaching and then bystanders grabbed his legs to steady him.

The incident baffled residents of surrounding streets, who took pictures and videos on their mobile phones.

Peter Dixon, of Gravett Close, said: “It was all a bit bizarre. I could hear what sounded like a hot air balloon but didn’t really believe it until I looked out of my upstairs window and saw him floating over our neighbour’s garden.

“I thought he was trying to get to the fields beyond but he was losing too much height, though he did have control.

“He hovered over Valley Road for a bit while talking to someone below, then came down. He didn’t get it right the first time, so he came back up while pushing the branches of a tree out of the way then landed. It was very entertaining.”

Mr Shemilt, who runs Henley blazer manufacturer Collier & Robinson with his wife Kristie, said: “I was running out of daylight and there was very little wind so I decided to put it down there because the street is very open and accessible. If I’d come down in the middle of the countryside I might have struggled to get home.

“People were very interested in what I was up to and were asking lots of questions.

“I’m pleased to see that ballooning still appeals to people’s sense of adventure and has a sense of romance attached to it.

“It has been great weather for flying lately as we’ve been having light winds and beautifully clear mornings. It was glorious last Sunday so I went out again and touched down at Henley Rugby Club.”

In 2009, Mr Shemilt set a world endurance record after he flew a hopper balloon for seven-and-a-half hours above the Alps, where the temperature was -15C.

The following year he set a distance record by flying 300km from Husbands Bosworth airfield in Lincolnshire to Ipswich.

He said: “Hopper balloons are great fun — they’re portable, lightweight and ideal for short flights over towns and the countryside as long as it’s a reasonably clear day. They aren’t safe in high winds or more extreme weather.

“It’s a bit like flying a paraglider as the motion is very gentle. It’s a great viewing platform and quite an indulgence and they even make a two-seater version with a little sofa underneath the balloon.

“However, you do feel quite exposed with just your legs dangling and nothing but a gap of several thousand feet between you and the ground.

“Hoppers have been around for ages but you don’t often see them so people don’t know what they are.

“On more than one occasion, someone has called the emergency services because they’ve assumed that I’ve lost my basket and am clinging on for dear life.

“I’ve had to convince them that everything was okay and that was how it’s meant to be.”