Bus abandoned with engine on 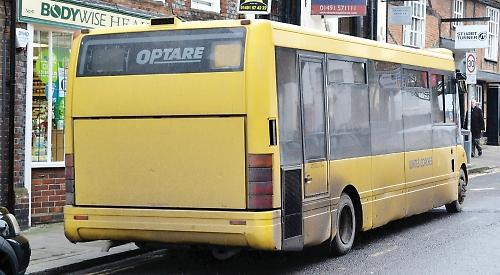 A BUS was left unattended with its engine running in Henley town centre for almost half an hour.

The Whites Coaches vehicle was spewing diesel fumes as it was parked at a bus stop in Upper Market Place.

The incident comes as Henley struggles to find a solution to its air pollution problem — levels of nitrogen dioxide in some streets have been above Air Quality England’s recommended safe limit for more than a decade.

It happened on Thursday, January 5 and was witnessed by town councillor David Eggleton, who filmed the bus on his mobile phone.

The driver of the 145C service between Henley and Woodcote parked outside the Bodywise Health Foods shop before getting out and walking away, leaving the bus doors shut and the left-hand indicator flashing.

When he returned to the empty bus 25 minutes later, Cllr Eggleton demanded an explanation. The driver apologised, merely saying it wouldn’t happen again, and then drove off.

Cllr Eggleton reported the incident to the police as it is an offence to leave an engine idling unnecessarily, which is punishable by a £20 fixed penalty notice.

He said: “I’ve got nothing against the bus companies as they provide a valuable service to the community. However, doing something like that is unacceptable.

“We’re trying to make Henley a cleaner place and this doesn’t help. His exhaust pipe was near the pavement and belching fumes straight at pedestrians. You often get groups of children walking up that way and it’s unfair to make them walk through a cloud of toxic gases.

“Aside from the pollution, it’s unsafe and completely idiotic. The bus wasn’t parked securely and could have killed someone if it had moved due to a mechanical fault.

“I don’t know if the doors were locked but I imagine the bus would have been easy for someone to steal.

“When the driver came back I told him, ‘you know this is illegal’. He just said, ‘I’m really, really sorry, this won’t happen again’ and left.” Nitrogen dioxide and particulate matter come from exhaust emissions and cause lung damage.

Cllr Eggleton said: “It’s our responsibility to make our environment safe and it would be a lot better if people killed their engines.

“If I’m in my van and know I won’t be moving for more than a minute I always switch off.

“Everyone must do their bit to reduce pollution. It’s not just Whites Coaches — I’ve seen other companies’ buses waiting up to 10 minutes with the engine going as well as taxis, cars, vans and lorries.

“People don’t realise there’s a problem because you can’t see it and the effects aren’t immediately obvious. I just want the town to be a clean and safe place for my children’s sake.”

Paul Conroy, who lives at Falaise House, next to the health food shop, with his wife Katie, said bus drivers often left their engines running.

These included the morning service to Abingdon School, also run by Whites.

He said: “They change drivers regularly so you’ll tell somebody off but the next week someone new will do the same thing.

“It’s a nuisance and you worry about the long-term health effects when it’s right outside your front door. People say it should be enforced but the police don’t have time to run around slapping fines on vehicles.

“I hope bringing this to the public’s attention will force the bus companies to do something about it.”

Henley town, district and county councillor David Nimmo Smith said Oxfordshire County Council was responsible for agreeing routes with operators but only the police could enforce the law.

The county council used to fund the 145 as well as Whites’ 151 to 154 routes around Henley but cut all its subsidies last year to save money.

Cllr Nimmo Smith said it could have used this as “leverage” to bring the company into line.

Patrick Fleming, who is treasurer of Henley in Transition and sits on the town council’s transport strategy group, called for a poster campaign encouraging drivers to “kill your engine, not your neighbour”.

He said: “Sadly, it’s common for passenger vehicles to leave their engines running, especially in winter as they don’t want difficulty starting and want to keep warm.

“We don’t want to pursue the legal route but will speak to the bus companies and explain that it’s upsetting residents as well as being illegal.”