Descendant of baronetcy who looks after our trees 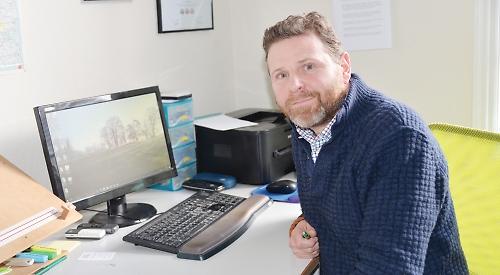 WITH so much concern about air pollution and climate change, Jasper Fulford-Dobson’s work as an arboriculturalist is becoming increasingly important — even if many people don’t understand exactly what he does.

In fact, he is one of the country’s leading experts on trees, growing, maintaining and removing them.

His company Fulford-Dobson Associates manages more than 30,000 trees across 100 sites for English
Heritage.

The 46-year-old, who lives in Albert Road, Henley, is also one of only 42 registered consultants with the Arboricultural Association.

“People ask me what I do for a living but when they hear the word ‘arboriculturalist’ not many of them understand,” says Mr Fulford-Dobson.

“One of the first things people say is ‘so you’re a tree surgeon’ but there is a massive difference.

“There are tree surgeons who do surveying and reports but to be a registered consultant you have to have certain qualifications and it takes a long time to achieve.”

Mr Fulford-Dobson’s passion for the countryside stems back to his childhood, first in Tokers Green and then in Shepherds Green where his family ran a small farm.

His father Roger was in the merchant navy before becoming a farmer and his mother Susan is a descendant of the Stapleton family of barons who owned Greys Court for more than 200 years. He has two older siblings, Giles and Emma.

“Some of my fondest memories are of getting up early and going down to feed some of the animals on the farm,” recalls Mr Fulford-Dobson.

“We kept mostly beef cattle. As a young boy, aged nine to 11, I would wander into the fields into the feeding areas and spread the hay bales.

“We were free to roam in those days and able to play in the woodland, surrounded by the Chilterns countryside. We were out there at all hours.”

When he returned, he enrolled at the Berkshire College of Agriculture at Burchetts Green, near Hurley, to study horticulture.

After finishing the course, he went to work on a flower farm in Australia and an organic farm in Canada.

When he came back to Britain he worked at Watts Forestry, a tree surgery company then based in Shiplake.

Mr Fulford-Dobson said: “We were doing some thinning for a local landowner and also took down some big trees. It was those things that sparked my interest and I’ve not looked back since.”

In 1996 he began a two-year national diploma in arboriculture at Merrist Wood College, near Guildford. After qualifying, he worked as a climbing arborist in London and California. This involved climbing trees to inspect them and, if necessary, felling them.

He enjoyed this job but it came at a cost.

“It is hard, physical work, a young man’s game, but now I have back problems, which is probably from trying to lift too many big bits of wood,” says Mr Fulford-Dobson.

“There is a lot of showmanship trying to outdo your team members by lifting the big bits of wood or climbing the biggest trees.”

After this, he worked as freelance for several years before becoming a contractor for Beechwood Tree Care in Wargrave and helped the company to become an approved contractor by the Arboricultural Association.

However, Mr Fulford-Dobson wanted to become a registered consultant, so he had to spend more time behind a desk and in 2005 he joined the Royal Borough of Windsor and Maidenhead Council, where he was responsible for its trees.

He recalls: “I knew what I wanted to do, and where I wanted to get to, and to do that I had to spend some time in local government.

“It gives you far broader prospects when you’re managing trees rather than spending time as a contractor or a tree surgeon. If you want to become a consultant you have to have spend some time doing it.”

He would inspect the council’s trees and also advise landowners on issues such as tree protection orders.

“It was different working in the public sector,” says Mr Fulford-Dobson. “I was used to being outside with a team of arboriculturalists and then I was in an office, although I was still going out on site visits.”

In 2007 he joined South Oxfordshire District Council as consultant tree officer. He says: “I got involved with the more strategic planning, which is a higher level of work where you are with the planning department looking at applications.

“If you are making an application that involves trees then you’re supposed to provide information such as an impact assessment. It was my job to point out what might be required, then I would go through it and help it be effective.”

In 2008 Mr Fulford-Dobson was hired by Jim Unwin to help his forestry consultancy firm, based in Gloucestershire, to manage the English Heritage contract that he now has.

“Jim really pushed me forward,” says Mr Fulford-Dobson. “He was fantastic and experienced.

“When the contract came round for renewal he was nearing retirement and said he thought I should go forward to do it on my own and that it would help start my own business.”

Fulford-Dobson Associates was formed in 2012 when he won the English Heritage contract, which now takes up about 70 per cent of his time.

He says: “I did it, thinking I would not get it but I sent off the documentation and won the contract for basically half the country, going from Derbyshire to the Isle of Wight and everything east of there.

“We have 15-month inspection cycles so we can look at the trees at different points of the year.

“I am English Heritage’s independent tree inspector and will recommend work, primarily for safety reasons but also for good management.”

Some of the sites he helps look after include Walmer Castle, built by Henry VIII on the Kent coast, and Kenwood House, a former stately home in Hampstead that is described as one of London’s hidden gems.

Mr Fulford-Dobson walks around the grounds of the historic properties observing the trees before writing up a report.

Apart from his work for English Heritage, he has worked with both Reading and Wokingham borough councils as well as for the Environment Agency on the riverside in Pangbourne.

He has also been called as an expert witness at a number of planning inquiries.

This variety of work helped him to finally qualify as a chartered level consultant.

He submitted a huge portfolio of work across six areas, including hazard assessments and tree protection legislation.

He was then interviewed by registered consultants about his hundreds of pages of reports as well as his knowledge of the profession.

Mr Fulford-Dobson received the news that he had passed in November.

“When I found out it was a relief as it was a huge personal achievement,” he says. “It was professional validation really.

“I started my diploma in 1996, so it was 20 years almost to the day that I was inspired to achieve it.

“When I was at Merrist Wood a consultant came to tell us what he did and I was inspired.

“I did all the work with landowners and in local government, working with another consultant and being mentored. I could not have got to the level I am now without all that.”

Now Mr Fulford-Dobson plans to grow his business, employing a technician and surveyor to help him with his workload.

He says: “I have kept it small and have tried not to grow too quickly. I don’t want to build an empire but I feel it would be useful to take people on.”

His work for English Heritage maintaining historic properties is a reminder of how his ancestors looked after Greys Court, which now belongs to the National Trust.

Mr Fulford-Dobson says: “I actually did work there when I was running my own tree surgery business in the Nineties but that’s the only involvement I have had.

“But when I was wandering around some of the historic properties I help look after it struck me that actually there is a sort of family connection.”

He and his wife his wife Christina have two daughters, Emilia, 14, and Georgina, 12, who attend Gillotts School in Henley.

He says the family is fortunate to live in the Chilterns, where the trees are now taken care of better than ever before.

“In my view there can never be enough trees,” he says. “It is clear that over time trees have become much more important and that is now recognised, particularly in the public sector.

“We have a lot of fabulously mature trees in public parks and private gardens and along the roadside. We are lucky where we are being surrounded by lovely countryside and Chiltern woodland.”