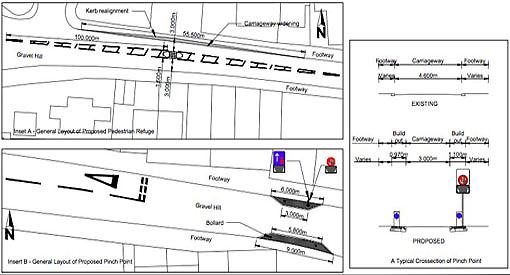 A PINCH point to slow down traffic on a Henley street could be installed after complaints by residents.

Oxfordshire County Council is consulting on proposals for Gravel Hill, including a narrowed portion of road with priority for traffic heading down the hill, a pedestrian island and flashing speed signs.

Last year, residents called for action over a piece of narrow pavement in the street which means parents with buggies and elderly people with mobility scooters are sometimes forced into the road.

David Nimmo Smith, Henley’s representative on the council, has handed out leaflets with details of the plans to residents of Gravel Hill, Milton Close, Ancastle Green, Paradise Road and Hop Gardens and is asking for feedback. He has also written to The Henley College.

Some residents have already objected. Writing online, Lizzie Micuta said: “It will be a nightmare with college buses. Rather than narrowing it, can’t you just consider speed bumps? At least that way traffic does keep moving rather than becoming bottled-necked.”

Donna-Marie Roberts wrote: “Could we not just have a zebra crossing and limit the speed to 20mph?”