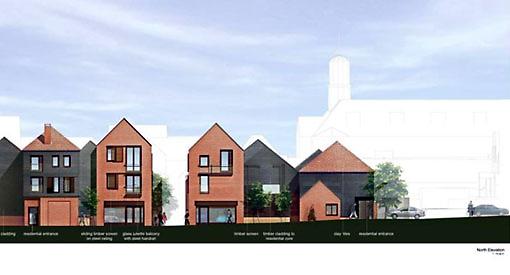 PLANS to build an electricity sub-station in a Henley car park are being opposed by town councillors because of the loss of spaces.

Three bays at King’s Road car park would be lost under the plans, which are part of the forthcoming re-development of Market Place Mews by Catalyst Capital.

The asset management company has planning permission to create 14 flats and 16,000 sq ft of retail space but the project has been hit by delays.

The sub-station would be located in the north-west corner of the car park, which is owned by South Oxfordshire District Council.

Catalyst Capital’s agents, planning consultants Turley, say it would not be near the historic King’s Arms Barn and it has been “sensitively designed” to ensure that it would be in keeping with the surrounding buildings.

It would “future-proof” the electricity demands of the businesses in the new-look mews.

Turley says a potential tenant has already pointed out that an existing sub-station in Bell Street may not have enough capacity to accommodate its business operation but Scottish and Southern Electric will not refurbish it due to the “complex and disruptive” nature of the work.

Turley says the district council’s officers have confirmed they support the loss of spaces in principle.

Councillor David Nimmo Smith said: “There are not enough car parking spaces in the town.”

Town clerk Janet Wheeler added: “I’m extremely concerned about the proximity of the sub-station to King’s Arms Barn, a listed building. It’s symptomatic of the fact this whole development is too big. They are putting in acoustic screening, which says to me it’s noisy.”

The district council, which is the planning authority, will make a decision by March 30.

Planning permission for the redevelopment was originally granted in 2007, when it was owned by the DeStefano Property Group, which later went into administration.

Meanwhile, a consultant could be used to help enforce the joint Henley and Harpsden neighbourhood plan despite concerns over the cost.

Henley Town Council has agreed to employ one when it needs help preparing a case against a planning application that is in conflict with the plan.

The committee heard that four consultants had provided quotes ranging from £75 to £170 an hour.

The consultant would work closely with the plan steering group and would help “tailor” objections to proposed developments.

He would press the town council’s views on planning officers at the district council when they were considering their recommendations to councillors and prepare or present the case for objectors when the district’s planning committee was making a decision.

Councillor Ian Reissmann told the committee that a cap ought to be put on the cost of a consultant and they should be given clear instructions about what was expected of them.

Mayor Julian Brookes proposed that Mrs Wheeler should be given delegated powers so that when an application was in conflict with the plan she should contact a consultant.

But Mrs Wheeler said: “It’s difficult for me because I feel strongly against spending any money on planning consultants. It’s money wasted.

“We’re only a consultee body, we don’t make decisions. If we were making decisions it would be a different kettle of fish.

“I think I would be happy if there was a proper process in place. We can’t give them an open cheque book — they will spend money like Smarties in a sweet shop.”

The committee recommended that the council’s neighbourhood plan steering group should be responsible for identifying when a consultant was needed.

The town clerk and committee chairman would then consult a panel of consultants as necessary.

The district council approved plans for 53 “extra care” flats for the elderly disabled at the former Jet garage site in Reading Road despite the land being earmarked for 55 ordinary flats in the neighbourhood plan and an application for an 80-bed care home at the former LA Fitness gym in Newtown Road, although the site is now up for sale.

Both decisions were made on the casting vote of the planning committee chairman.