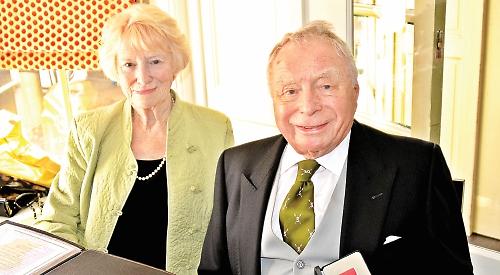 AN army veteran from Henley has collected his MBE at Buckingham Palace.

Brigadier Malcolm Page, who was recognised in the New Year honours, was presented with his medal by the Duke of Cambridge at a ceremony on Thursday last week.

The 90-year-old, who is president of the Royal British Legion’s Henley and Peppard branch, travelled to London with his sister Yvonne Meacham, branch chairman John Green and Mr Green’s wife Elizabeth.

Mr Page, of Ancastle Green, was honoured for voluntary service to former armed services personnel and in particular his work with the Royal Commonwealth Ex-Services League, which helps former servicemen and women at times of need. He is a former UK chairman of the League nd was a member of its council for 22 years before stepping down in May. He administered funds to veterans of the Somaliland Scouts, of which there are now only about 140 survivors.

Mr Page said: “It was a wonderful ceremony with the most beautiful pageantry.

“There was a band and ceremonial yeoman of the guard while the Duke was escorted by two of the Queen’s Gurkha Orderly Officers.

“We were led down all these corridors and waited to be called into the ballroom where the Duke was waiting.

“He pinned the medal on and had a very brief chat with each recipient before they bowed and left. He asked me about the veterans, the numbers still remaining and the ways in which we were able to help them.

“We only had two minutes as there were about 100 people to get through but he was lively, engaged and very generous with his praise.

“It was a very proud moment — it’s one thing to get a little letter from the Foreign Office and another to actually be there amid the pomp and splendour of the palace. I will be wearing the medal with pride at events like Remembrance Sunday.

“I felt quite wonderful but also very tired as we had left Henley at 8am and had to be there by 10.15am, which is quite a tall order when you’re facing London traffic. We were also late returning as we were so far at the back of the queue.”

After returning to Henley, the quartet enjoyed a celebratory lunch at The Square restaurant in Market Place. Mr Page was a member of the Scouts from 1947 until 1951. He joined the army in 1944, aged 18, and served in India, the Middle East and Africa for 26 years before pursuing a career in IT.

He set up the Henley Borama Friendship Association in the Eighties after visiting Somalia as a guest of the government and is a former recipient of the Henley town medal.

Meanwhile, Brian Hughes, who was awarded the British Empire Medal for voluntary service to ex-servicemen and women, will collect his award from the Lord Lieutenant of Oxfordshire at Henley town hall in May.

The 84-year-old, of Harpsden Road, Henley, is standard bearer and a fund-raiser for the same branch of the Legion.