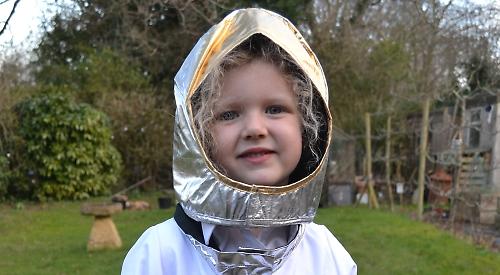 A GIRL with a space obsession is in the running for a national award after making her own film about astronaut training.

The youngster, who wants to follow in her idol’s footsteps when she’s older, will walk the red carpet with her family when she attends a star-studded gala at the Odeon in Leicester Square for the Into Film Awards.

The budding film-maker was nominated for her film Aurelia’s Astronaut School in the into space and home 12 and under , for which young film-makers were encouraged to make short films inspired by Peake’s mission.

In the introduction to astronaut training, Aurelia gives a number of lessons, including how to fit into small spaces, practising maths, being able to float in space and getting used to the dark.

She will attend the ceremony, which will be hosted by TV and radio presenter Edith Bowman, with her mother, father Adam, sister Rosanna and brother Rafe on
Tuesday.

She said: “I’m , really happy. It was loads of fun being an astronaut for my film.

“I bouncing on the trampoline best and learning how to make my rocket pictures move.

“I wish I could be a real astronaut and make films in space about everything I see there.”

Aurelia, a pupil at Checkendon Primary School, has been enthralled by all things space since 2015 when she saw the space shuttle Endeavour while on a family holiday to California.

Since then she has followed the voyage of Peake to the International Space Station.

“It obviously sparked something that the shuttle had been out to space and we were in there quite a long time looking at it. That tied in nicely with Tim Peake’s little mission.”

The family watched clips from Peake’s trip on YouTube and on social media and when Aurelia started school she began studying space as a topic. A space-themed fifth birthday party followed in October.

Mrs Wesbroom said: “Tim Peake was promoting the Into Film competition. He said ‘if you love space and you’re aged between five and 19, why not make a film and enter this competition?’

“We started to try and piece together bits and pieces of film. Aurelia was really enjoying telling her friends about space at school and decided she would quite like to be a space teacher.

“It started with doing one or two little bits and what can we tell people about astronaut training.

“She’s convinced that going to school is astronaut training. She has even come home complaining there enough maths!” Aurelia made the props and narrated the film and was helped with the editing by her mother.

Mrs Wesbroom said: “It was the first time she’d been let loose on my smart phone. Most of it was filmed in the house and there’s a clip at school. There was a lot of footage. I didn’t really want to edit it too much because at the end of the day it’s supposed to be her film.

“The reason it’s so wobbly is my son was on my lap and we don’t have a tripod!”

Aurelia sent her film in before the closing date and soon discovered her film had been nominated.

Her mother said: “It was disbelief really. I got this email through and was thrilled. Aurelia leapt all over the kitchen when we told her. She’s just starting out and having a go and I think that enthusiasm is coming across. I think it’s a really good learning exercise for her to see what these other children have achieved. It has sparked a bit of an interest for her in films.

“I’m a huge believer in the value of exposing children to lots of different experiences and topics and Into Film, through this competition, have done precisely that and sparked an entirely new interest for Aurelia.”

Aurelia, whose film was shown at a school assembly on Tuesday, says she is excited about her trip to London.

She said: “I want to be an astronaut and make films about stuff I find in space like Tim Peake did and to go to the new solar system.”

Into Film is supported by the BFI through National Lottery funding and its ambassadors include Eddie Redmayne and Naomie Harris.

The awards, now in their third year, honour youngsters who have shown exceptional achievements in or film reviewing and educators who have demonstrated use of film in the classroom.

Into space and home is a new category for this year and supported by the UK Space Agency.

The awards will be judged by a panel of industry leaders including actors, directors, producers, screenwriters and visual effects experts.

You can see the video here: