You shouldn't be parked there, Prime Minister 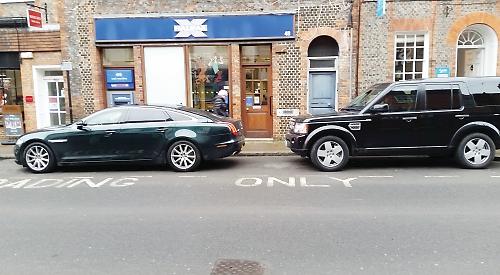 THE issue of illegal parking in Henley has been reignited after two of Theresa May’s cars were seen waiting in a town centre loading bay.

The Prime Minister’s dark green armoured Jaguar XJ Sentinel, with a chauffeur at the wheel, pulled up in the bay outside the Halifax bank in Bell Street at about 11.30am on Friday.

It was followed by a black Land Rover with tinted windows, which is believed to have been driven by Mrs May’s personal security team. Both vehicles then waited with their engines running.

Mrs May, who was making one of her regular visits to Henley with her husband Philip, was not in either car.

Passer-by Sandy Doggart took a photograph and waited for the PM as he wanted to congratulate her on addressing an EU leaders’ summit in Brussels the day before. However, when she failed to materialise after a couple of minutes, he left.

Mr Doggart, 76, of Badgemore Lane, Henley, believed Mrs May was shopping in womenswear shop Fluidity, opposite the bays, where she is a regular customer.

He said: “I wanted to meet her and say ‘well done’ but I realised that a woman in a dress shop can take a while!

“Her security team also looked a bit concerned about me hanging around so I decided to leave. I think it’s nice that she’s shopping in Henley as it’s good for the local economy. My friends often see her using the Reids dry cleaners.”

The bays should only be used by drivers loading or unloading at businesses, not shoppers, and are subject to a maximum stay of 10 minutes.

However, the bays in Bell Street and Duke Street are regularly abused by drivers, as exposed by the Henley Standard.

This means delivery lorries have to park on the pavement or double-yellow lines, causing congestion and putting pedestrians at risk. Last month, following complaints from business owners and town councillors, police promised to step up patrols and fine anyone breaking the rules.

Town, district and county Conservative councillor David Nimmo Smith, who is responsible for roads in Oxfordshire, said: “It’s rather embarrassing.

“I have no idea how long they were parked but they clearly weren’t loading or unloading.

“I very much doubt it was Mrs May’s decision that they parked there — her team should have read the signage properly.”

In October 2015 Conservative town councillor Lorraine Hillier, who was then mayor, was photographed parking her Nissan Rasheen in the loading bay outside Sainsbury’s in Bell Street as she was buying supplies for the Hot Gossip coffee shop in Friday Street, which she owns.

She accepted she had made a mistake but said she had spent only a few minutes inside the shop.

This week, she said: “It’s difficult because you shouldn’t use it for personal shopping but I guess Mrs May’s people have to be near her for security reasons. It’s hard to know what’s best in that situation.

“Personally, I’d like to see a shared use of those spaces. They could be loading bays at certain times of day and short-term parking at others, which would be a more efficient use of the space and might discourage abuse.”

A Met spokeswoman said: “We would not confirm the identity of police vehicles in such instances but the unauthorised use of a parking place by a police officer would need an operational reason.”