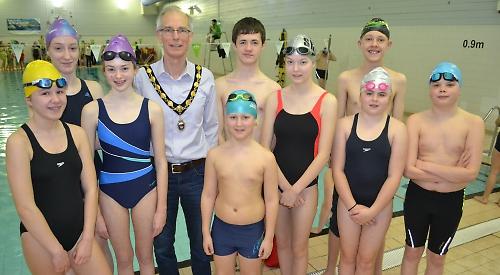 Each team had to swim as far as possible in 35 minutes with only one member swimming at a time. Teams could be made up of youngsters, adults or a mixture of both.

A total of 126 swimmers took part, completing 1,213 lengths of the 25m pool. Each one received a certificate.

The Gillotts boys swam the most lengths, clocking up 95, closely followed by the sea cadets with 89.

Sponsorship money raised by each team is shared equally by its chosen charity and the Lions to support local children’s charities, including Young Carers.

“You get an amazing atmosphere and every time I told them they had 15 minutes or 10 minutes left the noise was just deafening.”

Henley Mayor Julian Brookes presented a trophy to the Mencap team managers, Libby Meachin and Irene Howard, for the charity’s support of the event over the years.

He said: “I was really happy to be invited to support the event and thank you to the Lions for organising it. It was great to see so many youngsters taking part.

“It was suggested I should start it by swimming the first length but I thought that was a bit over the top!” The sea cadets had two teams — sea cadets and marine cadets — with juniors mixed between the two.

Petty officer Gemma McGrath said: “This is the fourth or fifth year we have done it and we had 13 cadets, which is the most we’ve ever had.

“They were all excited. Some were a little bit nervous but still enjoying it. It’s a lovely thing to do in the community and it’s for charity.”

Children from St Mary’s School have been taking part in the event for at least 10 years.

PE teacher Stephen Downes said: “It’s good to support local charities. We like to be part of the community and help out at local events.”

There were 25 Lions members and friends helping at the event and club president Wendy Franklin swam with the Chiltern Centre’s team along with her daughter Tash.

Lion Liz Brent, who organised the Swimarathon, thanked the leisure centre for free use of the pool and the social area.