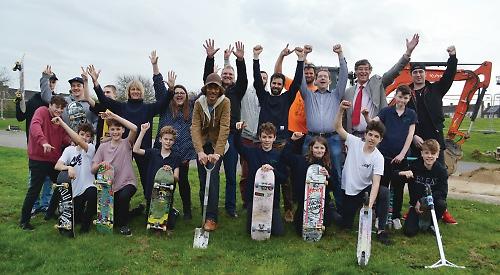 Security fencing went up on Monday and diggers are on site at Makins recreation ground, off Greys Road.

Maverick Industries, of Dorset, will build the facility, which should be open in early August.

The new skate park, which has been planned for six years, will have sunken concrete obstacles rather than hollow, metal ones and will cater for BMX bikers, skateboarders and roller-skaters. It will replace the original skate park, built in 2004.

Colin Brathwaite, chairman of the Henley Skatepark Initiative, said: “After thousands of hours of work, thousands of emails, hundreds of meetings, hours pouring over reports and funding applications, there’s a sense of victory. It’s good to finally feel like we’ve won. Obviously I’m extremely pleased. I think it will all really sink in once it’s finished and I can stand back and watch people enjoying it.

“Modern concrete skate parks are appearing all over the country and if you speak to any local council that has one they will tell you it’s extremely popular and a very valued asset to the community recreational sporting facilities. Henley is a very affluent town but young people still need something to do that doesn’t cost money. There are some kids that might not play football or rugby or the standard team sports. If you don’t fit into one of those teams at school you can feel a bit left out.”

Jimmy Lipscomb, vice-chairman of the initiative, said: “I’m so happy that after all this time you can see the start of the build. We’ve had some really positive feedback regarding the design that’s on our Facebook page and I’m really looking forward to the community having a state-of-the-art skate park that everyone can enjoy and be proud of.

“The old facility had reached the end of its life and there’s a big need for this facility in Henley.”

Town and district councillor Stefan Gawrysiak, who has supported the project from the beginning, said: “I feel absolutely fantastic after a six-year journey of sticking at it.

“We have now achieved a fantastic skate park. It’s another leisure and sporting facility in the town — the equivalent of the rugby, football and hockey clubs — and another opportunity for recreation and, hopefully, getting some Olympic stars of the future.

BMX rider Jake Clark, 18, who has been involved in the project since it began, said he had visited the old facility almost daily, especially during the school holidays.

“It’s still hard to believe it’s going to happen but seeing it now, everything’s set in place and it’s just phenomenal,” he said. “It’s so important for the town — it’s a real social hub.

“It’s going to be something to see from all over, not even just to ride it but to see how amazing it looks.”

He added: “I can’t wait for the new skate park. It looks amazing. I come down here most days if I’m not doing something away from Henley and it’s a great thing to have.”

Mr Brathwaite said the initiative still had to raise the remaining £15,000 and in the meantime it had borrowed this sum so construction could begin.