A CARE home on the redeveloped Townlands Memorial Hospital campus in Henley has received a critical report from a watchdog just four months after opening.

The Chilterns Court Care Centre was rated as “requires improvement” by the Care Quality Commission following an inspection.

The 64-bed home, which is run by the Orders of St John Care Trust, was officially opened in November by the Duke of Gloucester.

The unannounced inspection took place on January 25 after “concerns” were raised.

The inspectors found improvements were needed in four out of five areas and said the home was not always safe, effective, responsive or well-led.

Their report said: “People did not have confidence in the management of the service and were not confident that any issues raised would be listened to and dealt with.

“Staff morale was poor. Staff did not feel valued or listened to. Staff were not supported by regular supervision and were not confident to raise concerns with the management team.

“For example, one person’s assessment identified the person smoked. The smoking risk assessment document was blank and there was no management plan in place to identify how the risks associated with smoking would be mitigated.

“However, staff were aware the person smoked and at through the day we saw staff supporting the person to go outside to the smoking area to enjoy a cigarette.”

New staff told the inspectors they had completed training that had included safeguarding, dementia, communication, mental capacity and wellbeing and they were shadowed by more experienced members until they were competent and confident to work alone.

However, one new member of staff said they did not feel they were given enough training.

The report added: “Training records showed that not all staff had completed required by the provider.

“Following the inspection, the area operations manager provided an updated training plan that identified the staff who required training and the dates the training was taking place.”

Care plans were not always completed in line with the principles of the Mental Capacity Act.

For example, one person had not signed the consent to photography but there were photographs of the person on record.

The plans were not always fully complete and contained conflicting information.

The inspectors said: “Care plans were not always accurate. For example, one person's eating and drinking care plan stated, ‘cut up food and tell her where it is on due to eyesight’.

“We observed this person during lunchtime and saw the person cutting up their own food and managing independently.

“Care plans did not always contain guidance for staff relating to how people's needs should be met. For example, one person’s mental health care plan identified the person had ‘past history of self-harm or suicidal thoughts’.

“However, the person’s emotional wellbeing and mental state and cognition care plan not completed. There was no guidance for staff how they should support the person when they became anxious.

“We spoke to the registered manager and area operations manager about the care plans. They advised us that an audit of all care plans had started and formed part of the action plan compiled by them.”

One member of staff told inspectors they felt valued by the management team and had received a certificate of appreciation but others did not.

Staff gave examples of the registered manager “shouting” at staff in front of other staff and residents. 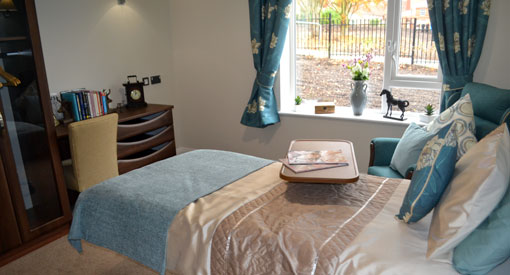 However, the inspectors also found the service was caring and staff treated people with compassion, while patients told inspectors they felt safe.

The report said were kind and caring, treating people as individuals and promoting choice and independence.

There was a “cheerful, relaxed atmosphere” that supported people to develop caring relationships with staff and each other.

Staff enjoyed working in the home and felt supported by their peers and there was good communication between the staff team.

There sufficient staff to meet people’s needs, people received their medicines as prescribed, these were stored safely and patients were positive about the food and drink offered.

Town councillor Stefan Gawrysiak, who is a member of the Townlands Stakeholder Reference Group, said: “I am most concerned about the CQC report because it seems to mirror earlier reports before the care home moved to the Townlands campus.

“Of course, if we have poor staff morale and poor staff communication it will reflect on the care that’s happening with patients in the home and I look to the Orders of St John to rectify these issues very quickly.

“I would have thought that with a new care home being opened with brand new facilities that, in fact, the level of care would be high at the beginning and those issues would have been sorted right from the start.

“Clearly the commission is taking this very seriously and I am under the impression it will do another inspection very, very soon.

“I’d like to get the trust to respond very rapidly to this report and make sure a report of this kind never happens again.”

Mayor Julian Brookes, who is also a member of the reference group, said he believed the next inspection would be at the end of next month.

“I sincerely hope the trust is paying attention,” he said. “I’m disappointed to see they need room for improvement but the real issue for me is that they respond in a positive manner and come out with a better rating in April.”

Henley MP John Howell said the home ought to “get on pretty quick and fix the problems” by the commission.

But he added: “All the feedback I’ve had is that the care home is providing excellent service and I’ve had no complaints at all from the relatives of people that are there.”

At a meeting of the reference group on Tuesday, Vivienne Laurie, a patient representative, said: “I'm very concerned that it was investigated without notice, not because there was no notice but because an investigation was needed as all was not well.”

Maria Melbourne, service manager for Oxfordshire County Council, said: “They were inspecting something that is open but not operating at maximum performance.

“No concerns were raised about the suitability of the facility to take patients and provide care. The points raised will be looked at and will be addressed.”

Sarah Adair, head of strategic communication and engagement at the Oxfordshire Clinical Commissioning Group, said the home received a good rating for its care of patients.

Patsy Just, assistant operations director at the Orders of St John Care Trust, said: “We are disappointed with the outcome of the recent inspection, although it was pleasing to receive a ‘good’ for the part of the inspection relating to care.

“As residents and colleagues have settled into their new home, since moving from Chilterns End at the end of last year, we have become aware of various issues that needed to be addressed.

“An action plan was already in place to resolve many of these before the visit. We have discussed this plan in detail with the commission and are working hard to ensure all steps are taken to implement the necessary improvements.

“Residents and their relatives should be reassured that their loved ones are safe and well cared for at Chilterns Court.”

The home replaces Chilterns End, the trust’s former home off Greys Road, which is likely to be sold for redevelopment.

The new home is built over three storeys and offers residential and dementia care.