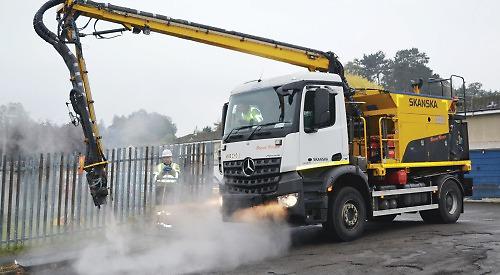 The road repair vehicle, which is owned by Oxfordshire County Council and operated by contractor Skanska, sprayed cars in St Andrew’s Road, leaving them needing hundreds of pounds worth of professional cleaning.

The 18-tonne machine has an articulated arm that is connected to a gas supply and fires a hot blast which evaporates water and ice on the road surface, burns off any dirt and melts the tarmac slightly to make it softer and more adhesive.

It then fires a high-pressure stream of hot gravel and bitumen at the ground through a separate nozzle.

The machine is manned by two people, one of whom operates it while the other follows behind it to level out the freshly-laid surface with hand tools.

Finally, the vehicle drives over the new surface several times to compact it using two rollers behind its rear wheels.

Last month, Councillor David Nimmo Smith, who represents HenHenley on Oxfordshire County County Council and is responsible for roads, said the success of the machine had persuaded the council to purchase a second one.

But now residents of St Andrew’s Road have complained that the machine expels a residue which lands on nearby surfaces, such as car windows and paintwork.

John Sheffield says his Honda Jazz was covered in a rough and sticky substance after the vehicle carried out repairs in the street, even though the car was parked on his driveway.

Mr Sheffield, 87, who lives with his wife Elizabeth, said: “Big notices were put up the previous week saying there was to be no parking on this stretch of road on two days.

“The workmen came and we were parked on the driveway, as were the neighbours opposite.

“There was no one parked in the road but we were just off it.

“The dragon patcher did its stuff and I didn’t think anything about it until the following morning.”

Mr Sheffield spotted that his car was covered in a sticky film which was difficult to get off.

“It was all over it,” he said. “I tried to clean the windows of the car and it was very odd as the wipers wouldn’t take anything off.

“I gave it a good polish and then took it to the hand car wash at the end of the week.

“When it came back I rubbed my hand over it and the paintwork and glass still felt quite rough.”

He then took his car to a garage in Newtown Road, Henley, where he was told it would require a machine polish for £300.

After he explained what had happened, the garage staff suggested he contacted the county council to see if it would help. He did this and a few days later workmen from Skanska visited his home and cleaned his car using Bitumax, a tar and bitumen remover.

Mr Sheffield said: “They spent two hours cleaning my car and then went across the road and cleaned the neighbours’ car.

“Once they had finished it felt fine, it wasn’t exactly as it was but it was fine.”

Mr Sheffield says that while there is no lasting damage to his car, he is worried that the same thing could happen to someone else.

He said: “You need to know that a car parked off the road can still be covered. Any car in front of a house or in the road is likely to be affected.

“I was also concerned about the house but that seems fine.”

Mr Sheffield’s neighbour Sue Grundy said that her car had a “very light” coating of tar, which was also cleaned by the workmen from Skanska but she wasn’t as badly affected as Mr Sheffield.

Councillor Nimmo Smith, who also lives in St Andrew’s Road, told a meeting of Henley Town Council last week that the machine had “splattered” cars because there was no protective covering stopping the tar from spraying about.

He said: “The dragon patcher has cost Skanska money because they were not familiar with using it in urban areas. We’ve seen it operating and noticed it does blast things out.

“Usually, they put up a tarpaulin to stop it splattering away from the machine. This time they didn’t put up the tarpaulin, they were being a bit too casual.

“It’s down to the contractor and they know they should have done it. When you are working in an urban area with houses nearby it does matter.

“People living in St Andrew’s Road were asked to take their cars off the road but with no tarpaulin there the cars got splattered.

“The machine works very well in rural areas where there are no cars around.”

A Skanska spokeswoman said the company was aware of the residents’ complaints and had resolved these without any lasting damage to their vehicles.