I'm losing custom because of deck use ban, says chef 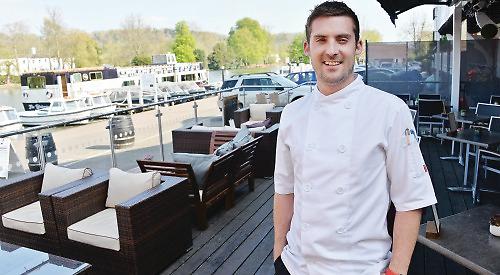 A CHEF and restaurateur says he is losing business because his customers are not allowed to sit outside in the evening.

Shaun Dickens, who runs Shaun Dickens at The Boathouse in Station Road, Henley, wants a planning condition that prohibits use of the decked area overlooking the Thames after 6pm changed to 9pm.

He says this would allow him to serve customers drinks outside before they go in to eat.

Mr Dickens, an award-winning chef who lives in Harpsden Road, had a similar request in March 2015 turned down by South Oxfordshire District Council, the planning authority.

He says he is trying again after losing a number of corporate bookings over the last 18 months.

Mr Dickens explained: “They take a look around and see the deck and they say, ‘wow, we’ll take it’ and we say, ‘you won’t be allowed to go out there’.

“They say, ‘can’t we have a drink outside?’ and we say ‘no’. People think it is laughable really.

“We have learnt to live with it but we don’t like it. I get the rules and regulations and why they exist but I really struggle. This is Henley-on-Thames, a tourist destination. People come here and want a lot of choice of stuff to do and I think the district council has put a dampener on what we can offer.

“If we could get permission it would be such a big boost for us and for Henley. We want Henley to do well — it has been struggling over the last two or three years with shops, restaurants and pubs closing.

“I’m proud to live in Henley and own my own restaurant and I want Henley to strive and be prosperous.

“It comes alive for two weeks of the year — the regatta and festival when it’s the best town in the world.”

The 6pm restriction has been in place since 2008, when Hobbs of Henley of was given permission to convert its boathouse into a restaurant, to prevent residents of neighbouring Boathouse Reach being disturbed by noise.

In his application, Mr Dickens says: “Currently this restriction is to the detriment of our business. We are receiving many negative comments and feedback from guests that they are not allowed to sit on the deck beyond 6pm. I lose bookings because we cannot provide the tranquil experience of a deck area for aperitifs. It is not the intention to use the deck to serve dinner but for pre-dinner drinks only.

“Any objections to noise appear unfounded as the level would only be conversation between restaurant guests. I would suggest that the noise would be no more, and probably less, than from passers-by walking along the river in the summer.”

He says Henley Town Council supports his application, as it did in 2015, explaining: “They do not want an empty property for sale which may end up in the hands of a major national chain which may have the influence to create more noise than the current ‘fine dining’ establishment that is on the site. My application is for three more hours’ use of the deck for people to enjoy aperitifs.”

Mr Dickens invites planning officers to visit the site, saying: “It will become very obvious that any possible objections on the grounds of noise, disruption, environmental or anything else would be unfounded due to the nature of the restaurant. The clientele using the establishment are respectful and courteous to fellow diners.”

Pilar Carpenter, of  Boathouse Reach, has objected to the application, saying that after 6pm it becomes a private residential area with very few people walking along the river. She added: “If this application was granted we would be subject to a great deal of noise and inconvenience which would change the whole area from what we have known for the 17 years I have lived at Boathouse Reach.”

Meanwhile, Mr Dickens plans to make more use of the deck during the day with a new menu, heated terrace, furniture, throws and an awning.

The Deck at the Boathouse will offer small plates, including pork taco, jalapenos, pickled cabbage and black garlic, truffle “mac and cheese” and chicken liver parfait, chicory chutney and bread.

His wife Gemma, the restaurant’s front of house director, said: “We decided to do this because we had some feedback from people saying they feel we’re a special occasion restaurant and they can’t come down to us just for lunch.

“This is casual riverside dining. It’s still Shaun’s vision of what food should be but it’s more affordable.

“Recently there was literally not a spare seat throughout the weekend. We had a buzz out there we have never had before. It’s nice to see our deck in full swing and have a full restaurant — it’s what we set out to do.”

The district council will make a decision on the application by May 30.