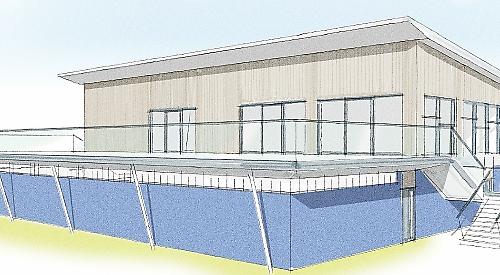 THIS is the proposed design of the new clubhouse to be built for Henley Hockey Club and the town’s youth football teams.

Developer T A Fisher will demolish the current facilities off Reading Road and build 35 flats under a deal to buy the land from Henley Town Council.

In return, the company will provide the hockey club and AFC Henley with a new building with changing rooms, toilets, showers, storage areas and a first floor social area with kitchens and a bar plus a viewing deck overlooking the playing pitches at Jubilee Park.

The two-storey building will also have about 80 parking spaces.

The council says it will invest the rest of the proceeds from the sale of the land.

The site of the existing clubhouse is one of 11 earmarked for housing in the joint Henley and Harpsden neighbourhood plan, which was approved in a referendum a year ago.

T A Fisher, which is based in Theale, has agreed that 40 per cent of the flats would be “affordable” and to include two shops in the development. Trevor Howell, chairman of AFC Henley, said: “In principle we’re very happy with the concept. I think it’s pretty nice actually.

“We hope that it will stimulate an interest in the club and put us on the map a bit more. We’re already a substantially sized club compared with other fairly big towns and this will be the icing on the cake for us.”

Chris Baker, president of the hockey club, said the clubhouse would be far better than the current facilities, which were showing their age.

It would also be next to the pitches, which meant players, particularly children, would be safer as they would no longer have to cross the access road to the Tesco store.

However, he questioned when the clubhouse would actually be built and said he was concerned that it would have less than a quarter of the storage space than in the current building.

Mr Baker said: “There’s a lot of excitement in the club and the fact there’s going to be a new clubhouse but at this moment in time we think there’s quite some work to be done.

“We would like it to be a lot bigger. It’s all very well having the thing a lot nearer the pitch but if you haven’t got anywhere to store things you have to put them somewhere else.”

John Fisher, managing director of T A Fisher, said: “From the community’s point of view, it’s a real win.

“The new clubhouse will now be on the same side of the road as the sports field and will provide a modern, purpose-built facility that will be a credit to Henley Town Council and the clubs that will be using the new building.

“We have had very positive discussions with the town council and the football and hockey clubs and we are working up the detailed design for the clubhouse with our project architect, Urban Pulse Design.

“The retail units and affordable homes are both much needed in the town and we are now working towards preparing a planning application for South Oxfordshire District Council.”

Councillor David Nimmo Smith, chairman of the town council’s Reading Road working group, said that as well as the affordable housing and the new clubhouse, the proceeds from the sale of the land would be invested for the “best long-term benefits of all the residents of the town”.

Councillor Will Hamilton, chairman of the council’s finance strategy and management committee, said the clubhouse would be a substantial contemporary building, adding: “We look forward to a great facility.”