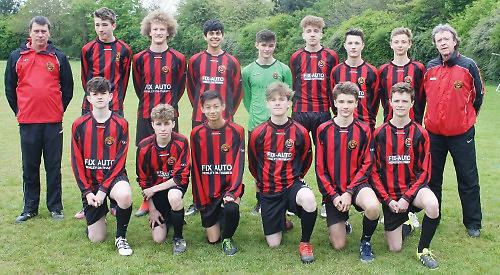 AFC HENLEY HURRICANES U16s were crowned Division 2 champions of the East Berks League in what was a season of two halves.

A slow start to the season saw Henley in the bottom half of the table struggling to get any momentum and consistency. In early December the Hurricanes found their form with an away fixture against Maidenhead which saw the team grow in stature and battle for every ball in a very physical encounter. The 3-1 win gave the side confidence which grew week on week from this game forward.

The Hurricanes went on a nine match unbeaten run which brought them in contention for a shot at the title with Maidenhead and Langley also competing for the top spot.

A home draw against Maidenhead and an away win against Woodley meant Henley went into their last game of the season on 30 points but a loss against Langley resulted in the Hurricanes having to wait for them to finish their two remaining games of the season. Langley won these and drew level on points and ahead of Henley on goal difference but the Hurricanes were awarded the title as when teams finish level the side with the most wins takes the honours. In this case Henley won nine matches to Langley’s eight.

It was a historic day for the Hurricanes as they won their first piece of silverware as they remained unbeaten throughout the tournament.

The format of the competition saw the Hurricanes go in to a four team league in the preliminary stage of the competition in which the Henley side triumphed 2-0, 1-0 and 3-1 with Tom Atkinson, Finnbar Scott, Nicolai Bruun-Andersen and Joe Turner all scoring. The 100 per cent record of the Hurricanes in the group stage led them into another group against four other group winners.

Turner and Bruun-Andersen were on target as Henley won their first game 2-1. The second game was a tight affair with Luca Tomson scoring the only goal in a 1-0 win while the third match finished in a 2-2 draw.

The fourth game amounted effectively to a league final against Burghfield. The Hurricanes started confidently with Atkinson notching early on with a predatory strike. Thomson also got on the scoresheet as the Hurricanes went into a 2-0 lead. Burghfield struck back to make it 2-1 but the Hurricanes held on to secure the trophy.

Henley dominated all four quarters with stand-out performances from Oliver Pratt and Theo Estornel in attack both winning the man-of-the-match award.

The Hurricanes gained an early lead with Oliver Pratt scoring from a through ball from George Bottomley. In the second quarter Bottomley extended the lead converting a pass from Pratt.

Ascot, having been unbeaten all season, were unable to break down the Hurricanes defence with Ben Chapman, Jack Renders and Max Thatcher dealing with the United attack.

Thomas Ferguson controlled the midfield providing the through ball to Pratt who crossed for Estornel to convert the Hurricanes’ third goal.

In the final quarter a long through ball from Chapman was converted into the top corner by Pratt to wrap up the scoring.