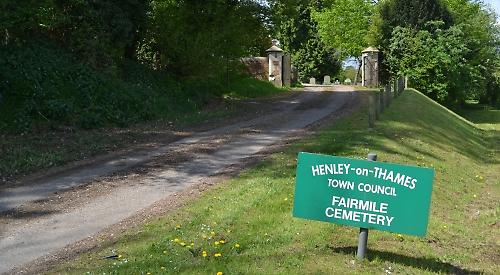 HENLEY Town Council has admitted a series of blunders over burials at Fairmile Cemetery.

It has issued an apology to two families involved and agreed to pay their legal costs after a court case where the errors were revealed.

The council has admitted:

• Permitting the burial of at least one man in the wrong plot, which is unlawful.

• Preventing the burial of another man in that plot, which he had paid for.

• Suggesting the “sliding” of the first body to try to correct the error, which is unlawful.

• Poor administration of the cemetery, off Fair Mile.

It comes months after the council had to apologise to the widow of a man whose coffin was “squashed” in between two other graves.

The latest case was heard by Rev Alexander McGregor, chancellor of the Consistory Court of the Diocese of Oxford, in Reading where Alexis Leventis petitioned for the removal of a body from a plot that he had reserved exclusively for himself.

The body of Victor Miller was buried in the plot incorrectly.

But Rev McGregor ruled that it could not be exhumed because of the distress it would cause his family.

The court heard that Mr Leventis’s father Constandinos was buried in plot 192, in the consecrated part of the cemetery, in February 2012 after his widow Christine Leventis acquired exclusive right of burial from the council.

Other members of the family subsequently acquired exclusive rights to three adjacent plots in line with Mr Leventis Snr’s wishes.

Mrs Leventis was to be buried with her husband, whose plot was dug to double depth, with her daughter, Anna Leventis-Stevens, next door.

Alexis Leventis acquired the rights of burial to plot 172 for himself and plot 173 for his sister, Chrysoulla Jackson.

The problems began in April 2013 when John
Summersby was wrongly buried in plot 171 when he had bought the exclusive right to plot 170. However, the location of his grave was incorrectly noted in the cemetery records and the error was not discovered until March 2015 when Mr Miller died.

His son-in-law Justin Morley was granted exclusive right of burial in what was stated in the application to be plot 171 but in fact was plot 172.

Mr Miller was buried on April 13 at double depth so as to accommodate his widow, Linda, when she dies.

The error was only discovered by Mrs Leventis later that month when she was visiting her husband’s grave.

The family made it clear that they wished to assert their exclusive rights to plot 172.

Mr Leventis petitioned for the exhumation of the body of Mr Miller but Mr Miller’s widow and daughters Louise Morley and Victoria Miller objected. The case was heard in March.

In his judgement, Rev McGregor said he had heard evidence that Mr Kennedy had suggested to the Leventis family he could arrange for Mr Miller’s body to be relocated informally.

He said: “This would be achieved by what he referred to as ‘sliding’ the body, i.e. excavating the ground so as to move the coffin sideways so that it no longer occupied plot 172 but without lifting it out of the ground.

“Mrs Jackson questioned the propriety of this, having received the impression that it would be done without the Miller family being told.

“I pause at this point to observe that any interference with human remains that have been buried in consecrated ground would, unless authorised by faculty, be unlawful under ecclesiastical law.

“If such interference amounts to the remains being ‘removed’ it is also a criminal offence.

“I was therefore concerned to learn that the relocation of Mr Miller’s remains without lawful authority in the form of a faculty had been proposed by the then town clerk.

“I was even more concerned to hear in evidence from [the current town clerk] Janet Wheeler that she was aware the practice referred to as ‘sliding’ was... being used in other cemeteries to correct mistakes, albeit not a practice she herself would ever resort to.”

Rev McGregor said Mr Leventis had said he was doing no more than seeking to secure a right that legally belonged to him.

However, the Miller family argued that although a mistake had been made by the council, the circumstances did not justify exhumation. Their case was supported by the council.

Rev McGregor said: “An alternative burial plot adjacent to the plots reserved by the Leventis family was available.

“Over a year had elapsed between the burial of Mr Miller and the bringing of the proceedings, during which time they had reasonably assumed that no action was to be taken.

“The town council accepted sole blame for what had happened up to, and including, the burial of Mr Miller and publicly apologised to both families for the distress they have faced as a result. Nevertheless, the council had decided that it could not support the petition. Although the Miller family were acting in good faith at all times, as a result of poor administration of the cemetery by the town council, the burial of Mr Miller’s body in plot 172 was unlawful.

“The mistakes which resulted in Mr Miller being buried in plot number 172 mean that, unless his body is exhumed, the wishes of Mr Leventis (Snr) cannot be fulfilled.”

Rev McGregor said he accepted Mrs Morley’s submission that exhumation after the length of time that had elapsed would have a substantial impact on the Miller family.

He said: “Mrs Miller said that she attends her late husband’s grave twice a week and that her children and grandchildren accompany her there. The place where Mr Miller was buried has become his resting place.

“The exhumation would cause serious distress to his widow and other members of his family. The wishes of the late Mr Leventis, while they cannot be satisfied in the terms in which he expressed them, can be approximately satisfied by the acquisition by the Leventis family of alternative plots which would enable them to be buried together in a different configuration.

“While the mistaken burial of Mr Miller’s body in plot number 172 — together with a desire to fulfil the late Mr Leventis’s wishes — is capable of constituting a special circumstance which might overcome that presumption of permanence, taking into account the other relevant factors of this case, the petitioner has not discharged the burden that lies on him.”

Rev McGregor concluded: “The town council have accepted responsibility for the errors which resulted in this state of affairs. They have given an unreserved apology to all concerned.

“They have said they will make such vacant plots as there are available to the Leventis family in any configuration they wish.

“Although they were clearly at fault in the events that resulted in Mr Miller’s body being buried in plot number 172, they are doing all that they reasonably can to make amends now.

“The council has accepted that it should pay the court costs and the costs (including the legal costs) of the other parties.”

In a statement, the council said: “Henley Town Council apologised to both families, who were in court, for the mistakes that have undoubtedly caused them such suffering.”

The statement said the council had appointed its own specialist grave digger and was about to interview for a cemetery warden.

New noticeboards were on order along with quotes to improve the paths.

The council had also obtained planning permission to refurbish the chapel at the cemetery.

“The aim of Henley Town Council is to make Fairmile Cemetery a beautiful place were Henley residents and neighbours can visit and remember their loved ones,” the statement said.

The council’s barrister Nicholas Leviseur said: “While it was not possible to turn back the clock, Henley Town Council has taken immediate steps to ensure better management and new processes at the cemetery.

“The town clerk is currently conducting a robust and comprehensive review of all the records and registers for the last 20 years (the town council took over the cemetery in 1997).

“She has also moved swiftly to ensure new processes to mitigate any future errors.””