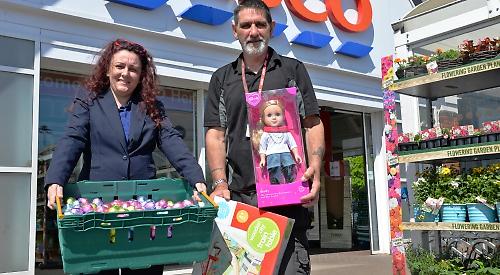 Tesco has donated toys and hundreds of chocolate eggs to good causes.

Town councillor David Eggleton collected the goodies from the supermarket off Reading Road, Henley, on behalf of the Gainsborough Residents’ Association, of which he is chairman.

He will give the eggs, which were left over from an Easter egg hunt hosted by the branch, to schools around the town as well as Henley youth and community project Nomad, which is based at the d:two centre in Upper Market Place.

The toys, which were donated by shoppers and include train sets and dolls, will be given to children at the John Radcliffe Hospital in Oxford as part of the association’s annual Santa run in December.

Councillor Eggleton said: “It will be nice for people who are struggling, like single mothers or the elderly, to be given the chocolate eggs as they rarely get treats. It’s nice to know people are thinking of you.”

Nyree Brunger, the store’s community champion, said: “Hopefully these gifts will make a real difference to the people who receive them.”