I was threatened on eve of mayor vote, says Tory rebel 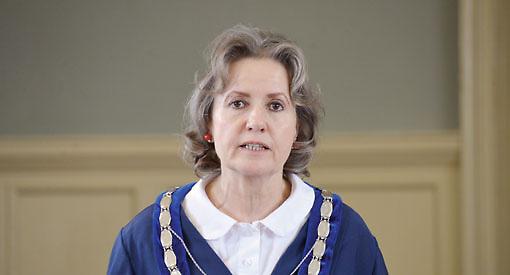 THE new Deputy Mayor of Henley says she was threatened over her decision to effectively take away control of the town council from the Conservatives.

Lorraine Hillier also said that her two businesses had been threatened with a boycott.

The Conservative town councillor defied her party by abstaining from the vote at mayor-making last week, meaning Kellie Hinton, of Henley Residents’ Group, was voted in by eight votes to seven rather than Conservative mayor-elect Will Hamilton.

Councillor Hillier was then elected Deputy Mayor, sitting as an “Independent Conservative”.

The drama sparked a walkout by about 20 members of the public from the ceremony at the town hall and outgoing Mayor Julian Brookes had to calm down the audience of around 200.

Cllr Hillier said that after the ceremony a woman who had attended urged people to boycott her businesses, the Hot Gossip coffee house in Friday Street and the Upstairs and Downstairs tea shop in Duke Street.

She said: “There’s no need to threaten somebody’s livelihood. At the end of the day we’re supposed to be a democracy.” She also revealed that she had been approached in the street at about 1am the day before mayor-making by a man who was “worse for drink” and told her that she “ought to think very carefully” about her decision the following day.

As a result, her sister Susan George wanted to accompany her to the ceremony.

“I’d been threatened so I was frightened of going up to the town hall on my own,” Cllr Hillier. “Susan wanted to support me and be there.” Cllr Hillier, who was mayor in 2015/16, has denied any wrongdoing or making a deal with HRG in order to secure the role of deputy mayor.

Instead, she blames her former colleagues for “ostracising” her after she accepted a nomination by HRG for a second successive term as mayor when Julian Brookes was elected a year ago.

She said that since last Monday’s mayor-making she had not spoken to any of the Conservatives councillors.

“I’ve been aware of those who have blanked me, put it that way, but I haven’t had anybody come up to me or say anything awful,” she said.

“There were accusations of changing my political allegiance but I’ve always been a Conservative — there was no way I was going to cross the floor.

“This is difficult but I think if everybody can get over it and forget about position and having control and just work together.

“If as much was put into Henley and supporting the town as there is into backbiting, we would be fantastic.”

She said Councillor Hamilton had been “fully aware” of her intentions, adding: “I can fully understand it from Will’s point of view and that it will take a while for him to get over it but his time will come, it really will.

“You stay on the council because you enjoy it and you want to make a difference, you don’t stay on to get a title — it’s not all about that.”

She said Cllr Hinton would make an “excellent” mayor and added: “It’s great to have a younger person in that role and I want to give her 100 per cent.”

Cllr Hillier thanked those who had supported her, saying: “You find out who your true friends are in times like these and they have been very supportive.

“I’ve had a lot of support from people saying how brave I was because it wasn’t an easy decision and saying ‘well done, you’ve done the right thing’.”