Standard bearer to be presented with British Empire Medal 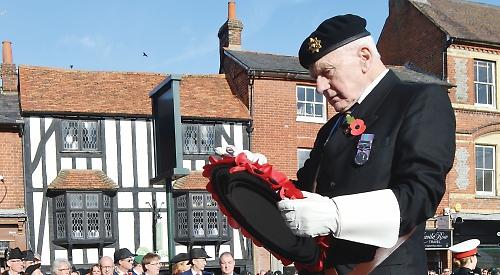 AN army veteran from Henley is to be honoured at the town hall.

Brian Hughes, of Harpsden Road, will be presented with the British Empire Medal by John Harwood, the Vice Lord-Lieutenant of Oxfordshire, at a ceremony next Sunday (noon).

The 84-year-old was named in the Queen’s New Year honours list for voluntary service to former armed services personnel.

He is bearer for the Royal British Legion’s Henley and Peppard branch and a fund-raiser. He started collecting for the Poppy Appeal in 1995 and has raised more than £60,000 to date.

He started standard bearing in 1999 after responding to an advert in the Henley Standard. He has carried the branch standard for 17 years and has been the Oxfordshire bearer for 11 years.

He has also carried the Henley Group of Dunkirk Veterans’ standard and won bearer at the county championships 11 years running. He takes part in Henley’s Remembrance Sunday parade every year and has also taken part in 80 repatriation parades.

In 2010 he was awarded the Legion’s Gold Badge in recognition of his service and last year he received the Henley town medal.

Mr Hughes and his wife Ursula, who celebrated their diamond anniversary in February, are both Henley born and bred. He attended the former Henley Infants School, Trinity School and the former National School.

Mr Hughes was conscripted into the Royal Army Service Corps and served in the Suez Canal zone with the Royal Electrical and Mechanical Engineers, for which he earned the GSM medal. He also collects regularly for the 1940 Dunkirk Veterans Association and the Royal Air Force Benevolent Fund and visits schools to talk about the Legion’s work.

John Green, chairman of the Henley and Peppard Legion, said: “Despite advancing years and serious health problems, Brian continues to collect in all weathers. His house-to-house and street collections still represent 40 of our street collection total and 25 overall. Brian is a strong community presence and is every inch an ‘old soldier’ in turnout, bearing, dedication and determination to carry out his role well beyond the call of duty.”

• Brig Malcolm Page, the branch president, was made an MBE for his work with the Commonwealth Ex-Services League. He was presented with his accolade by the Duke of Cambridge at Buckingham Palace in March.