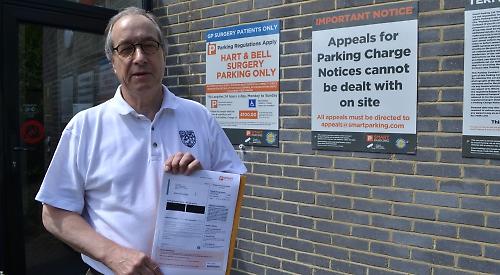 A MAN was given a £100 parking fine while dropping his sick wife off at a Henley doctor’s surgery.

Nigel Geary was the victim of a fault with the new parking system at the two GP surgeries off York Road which he says “bully” people like him.

The Henley Standard understands that his complaint is one of many made since the system was brought in last month to crack down on abuse of the small car park at the Bell and Hart surgeries.

Dr Geary, of St Mark’s Road, Henley, said: “I am in favour of stemming the abuse of the surgery parking by shoppers or even office workers but erroneous penalties cause people angst and the companies operating these systems should be accountable and responsive.

“Why not have a couple of retired guys patrolling the car park during surgery hours and pay them a small amount? Run it as a town system rather than letting them bully and intimidate us.”

Dr Geary was fined for allegedly failing to enter his registration details while using the car park on May 3.

He had stopped in West Lane to let out his wife Natalie, who has a long-term condition requiring regular GP and hospital visits, before driving into the surgeries’ car park at about 9.20am.

By the time he had parked, his wife had entered his registration details at reception of the Bell Surgery and he waited about 10 minutes for her to complete her appointment before they left together.

Six days later, Dr Geary was surprised to receive a penalty notice through the post, telling him he was being fined £100 for failing to enter his car’s details but the penalty would be reduced to £60 if he paid within two weeks.

He says his details were correctly entered by his wife before he drove into the car park and that they left within the 15-minute grace period allowed anyway.

The car park is monitored by Smart Parking, which uses automatic numberplate recognition to track vehicles going in and out of the car park. The new system came into effect on April 10 and requires patients to enter their vehicle’s registration details on a touch pad at reception to receive a maximum of 90 minutes of free parking.

The grace period for drivers dropping off or picking up other people doesn’t require any details to be entered.

Dr Geary, a director for partners of a data analytics company, said that when he spoke to the surgery he was told it had received numerous complaints from other drivers who had also been fined.

He said: “I got back from Texas the previous day and came down at 9am because my wife wanted an early appointment.

“She put the number in and then I drove into the car park. I was in there for 10 minutes and 48 seconds.

“I got the letter on the Thursday morning which said I had 14 days to pay. I thought I need to sort this out, this is not right.

“I went to the surgery and asked what the rules are with the system and they explained they had had a whole stack of these complaints.

“They said there was a fault in the system that was fixed on May 8. The drop-off limit was only corrected after the fault was discovered.

“It’s their systems that are not adequate. We entered the number, they just don’t have any leeway with their logs.

“They should allow 15 minutes for a drop-off and if you register it should be 90 minutes. On both counts we were in the clear.”

Dr Geary said the surgery offered to send his charge back to Smart Parking but he decided to write to the company to say the system was was flawed.

He said: “Since we did enter our registration on arrival I am suspicious that if you do this even a minute before entering the car park then Smart Parking systems aren’t smart enough to recognise these events are linked.”

A notice on the surgeries’ website says: “The surgeries will have the ability to overrule a parking charge if applied unjustly.

“However, all appeals must initially go through Smart Parking by email.”

A Smart Parking spokesman said the company was brought in to manage the car park “to stop parking abuse and to ensure patients and practice staff always get priority parking”.

He added: “We are members of the British Parking Association and strictly follow its guidelines. For those motorists who feel there are mitigating circumstance in their cases, we operate a BPA audited appeals process.

“In the case of Dr Geary we have now cancelled his charge.”

The neighbouring Townlands Memorial Hospital and Chilterns Court centre home both use the same system, although at the hospital the length of stay is unlimited once the details have been entered and the grace period is 20 minutes.

Visitors to each building are also restricted to using its own car park, meaning hospital patients cannot park in the surgeries’ car park and vice-versa.

In March, members of the Townlands Stakeholder Reference Group warned that the new parking system would cause confusion and lead to parking penalties.

Patient representative Vivienne Laurie said: “I’m concerned that there’s going to be a lot of face-to-face confrontation for reception staff at the surgeries and the hospital.”