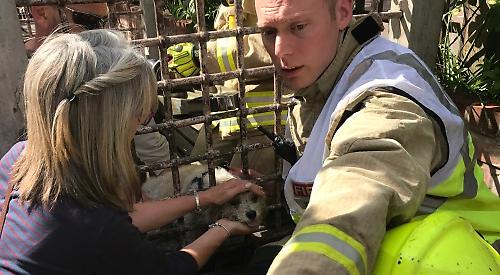 A STUDENT has praised firefighters who rescued her dog after its head got stuck in metal fencing in a Henley pub garden.

Marnie Spiers, 21, tried to free Immy, a seven-year-old Jack Russell-Bichon cross, herself but without success.

It was only after another customer at the Bull on Bell Street called 999 that the three firefighters arrived and freed the little white dog from the trellis none the worse for her ordeal.

Miss Spiers, of Watermans Road, Henley, said: “I want to say a massive thank-you to the firemen, who were brilliant, and a thank-you to all the people there who helped us and were really supportive.”

The drama happened on Sunday afternoon, just a day after Miss Spiers had returned to Henley from university.

She went for a walk with her mother Lesley and then they met up with her grandmother, Joyce, who lives in Station Road, and other family members at the Brakspear pub.

Miss Spiers said: “We wanted to enjoy the sunshine so mum and I went for a stroll with Immy but if we had known what was going to happen we would not have left, to be honest.

“We knew that my grandmother was at the pub where she was having lunch with more of our family, so we joined them for a drink afterwards. We had an outside table and Immy was sat in between us minding her own business.

“There was a black poodle on the other side of the metal fence. She wanted to sniff and make a new friend but little did she know she would get stuck.”

When Miss Spiers saw what had happened she tried to free Immy.

She said: “All the people sitting there were trying to help and were making suggestions like ‘straighten her up and tilt her head’ but that didn’t work.

“Immy then began getting distressed and we didn’t want to hurt her. We decided to use some olive oil from the bar to slip her head through but that didn’t work either.

“It was quite scary as the fence was really tight round her neck and I was worried she would hurt herself, poor little thing.”

They used a metal claw to bend the metal trellis apart and Immy was free.

Miss Spiers said: “Once the firemen turned up it only took them about five minutes to get her head out.

“The equipment was quite loud and noisy and would have been nerve-racking for her but overall she was brilliant.

“Me and mum were there stroking her and the sound of our voices was calming her down. She was very brave and we were very proud of her.

“As soon as her head came out she was running around with her tail wagging. She was just happy to be alive.”

She added that Immy had only had a protective collar cone removed two days before after being treated for an eye infection.

If she had still had this on, she wouldn’t have been able to get her head through the trellis.

Her mother works for the Henley Housing Trust, her father Kevin is a carpenter and her brother Joe, 25, works in IT.

The family got Immy as a puppy from a kennel in Chinnor and enjoy walking her along the Thames towpath.

Miss Spiers, who went to Trinity Primary School and Gillotts, said: “We take her down the towpath and sometimes stop at the café. We also give her a lot of attention at home.”