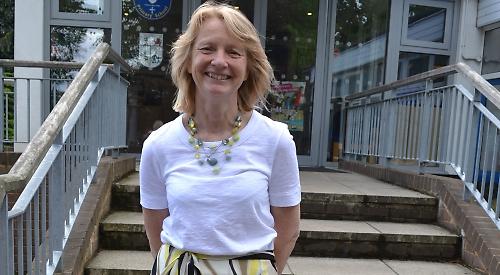 A NEW headteacher has been appointed at Badgemore Primary School in Henley.

Marion Arnold, who is currently assistant head at Trinity Primary School in Vicarage Road, will take over from Jacky Steele in September.

Mrs Arnold, 57, who lives with her husband Richard in Braybrook Road, Wargrave, used to work in business and advertising but gave up working when her first child Jenny was born in 1991.

The mother-of-three retrained as a teacher in 2000 and worked at Cookham Dean Primary School for almost four years, then moved to Robert Piggott Junior School in Wargrave, where she stayed for about a decade before moving to Trinity.

Mrs Arnold will attend a series of meetings over the next few weeks to meet her new colleagues and parents. She said: “It all turned around pretty quickly and I was thrilled to receive the offer. I’m looking forward to working at a smaller school with a great reputation for working well with children from many different backgrounds. The fact that it’s a forest school is also very appealing.

“It’s too early to say what my goals will be. My mind is still on my duties at Trinity and it will be very important that I listen to the Badgemore community and get a better idea of its needs before making any changes.

“I’ve absolutely loved my time at Trinity. It has been great fun and I’ve enjoyed working with children from all age groups, not just the juniors, as I get to see their progression from a very young age.

“My proudest achievement was contributing towards our ‘outstanding’ Ofsted and Siams (Statutory Inspection of Anglican Methodist and ecumenical Schools) reports last year, though I would stress that was very much a team effort.

“There’s a very friendly atmosphere among staff and we work really well together. My colleagues have been wishing me well and saying I’ll do a great job, which is very kind.”

Mrs Steele, 54, from Lower Earley, is moving to a school in Reading in order to support her son, Louis, who is starting his GCSEs in the next academic year.

During her three years at Badgemore, she introduced a new uniform and logo and oversaw a multi-million pound extension.

The school’s Ofsted rating has improved from “requires improvement” to “good”.

Mrs Steele said: “I’m sure Marion will have a ball being the headteacher at Badgemore. I’d never been a head before I took up this post and, as with any role where you’re in charge of an organisation, you’ve got to hit the ground running.

“However, with the support of our school’s families, staff and governing body, I’m confident that she will settle in quickly and do a fabulous job.”