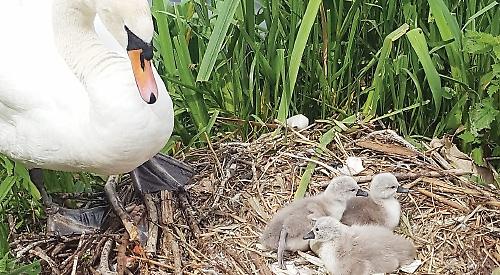 A NEWLY-hatched cygnet was killed in a suspected dog attack by the Thames near Henley.

A member of the public found the creature severely injured by the towpath on the Berkshire side of the river opposite Fawley Meadows while out walking on Sunday morning.

The walker phoned the Swan Support rescue centre at Datchet and Wendy Hermon, the charity’s treatment co-ordinator, raced to the scene. She tried to keep the baby bird alive but it died in her arms.

A post-mortem revealed it had been bitten twice in the chest and the culprit was most likely a dog as a fox would probably have taken it away and eaten it.

The cygnet is thought to have been one of four that hatched from a nearby nest the previous evening.

Five eggs were originally seen in the nest but one vanished before hatching.

The charity has taped off the nest in a bid to protect the mother and her remaining brood and is urging dog walkers to keep their pets on a lead at all times.

Mrs Hermon said: “We can’t say for sure what happened but the bank and undergrowth around the nest had been disturbed and it’s clear a lot of dogs had been jumping in and out of the water from that point. The post-mortem proves it couldn’t be mink or something of a similar size while a fox would likely have taken all the cygnets. I imagine a loose dog attacked the cygnet then dropped it when its owner shouted.

“I was only there for 10 minutes and at least six dogs walked by, so it would make sense. I keep dogs myself and just think it’s common sense to keep them on a lead in a public area, not just because of things like this but also the mess they can leave.

“We had a similar attack at Cookham recently so this is an emotive topic for me and I think it’s disgusting. I often see people walking along chatting on their phones without having an eye on their dogs.

“You can’t blame the dogs for acting on instinct and I know my dog would go into ‘killing mode’ if it got hold of a bird, which is why I don’t allow it to happen. There’s only so much you can do about wild animals attacking swans but this is so unnecessary and avoidable.”

David Barber, the Queen’s swan marker, said swan numbers on the Thames were in decline and dog attacks were one of the main factors. He said: “I am horrified by the dog attacks being suffered by nesting swans on the Thames in recent weeks. Of course, we all like to take our dogs for walks along the towpaths but they must be kept under control and wildlife must be respected.

“This is happening up and down the river because people aren’t keeping them on leads. Swans have a hard enough time with predation from the wild and this only compounds the problem.”

Swans on the Thames are the property of the Crown and are counted by Mr Barber every summer during swan upping. The number located in the Henley area declined between 2012 and 2015 but increased from nine to 16 last year.