Veteran filled with emotion as he receives royal honour 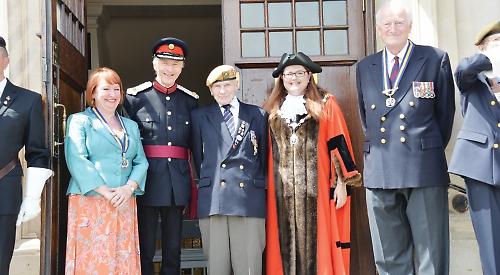 ARMY veteran Brian Hughes shed a tear as he was honoured at Henley town hall on Sunday.

The 84-year-old was presented with the British Empire Medal by John Harwood, the Vice Lord-Lieutenant of Oxfordshire, at a ceremony in front of about 60 people.

He was recognised in the Queen’s New Year honours for voluntary service to former armed services personnel.

Mr Hughes, of Harpsden Road, Henley, is standard bearer for the Royal British Legion’s Henley and Peppard branch and a fund-raiser.

Mr Hughes was given a guard of honour by standard bearers from across Oxfordshire as he arrived at the town hall with his daughter Deborah de Tisi and her husband Nick. His wife Ursula was unable to be there due to illness.

Spectators applauded as he made his way up the town hall steps.

Cllr Gawrysiak began: “Brian, I have it on fairly good authority that her Majesty the Queen was quite annoyed that her schedule meant she couldn’t be here with you today.”

Mr Hughes started standard bearing in 1999 after responding to an advert in the Henley Standard. He has carried the branch standard for 17 years and has been the Oxfordshire bearer for 11 years.

He has also carried the Henley Group of Dunkirk Veterans’ standard and won best bearer at the county championships 11 years running.

Each year he takes part in Henley’s Remembrance Sunday parade and he has also taken part in almost 80 repatriation parades, mostly at the John Radcliffe Hospital in Oxford.

In 2010 he was awarded the Legion’s Gold Badge in recognition of his service and last year he received the Henley town medal.

Mr and Mrs Hughes, who celebrated their diamond anniversary in February, are both Henley born and bred. He attended the former Henley Infants School, Trinity School and the former National School.

He started work in 1947 at Hammants of Henley and stayed there for 50 years, minus his National Service.

Mr Hughes was conscripted into the Royal Army Service Corps in 1950 and served in the Suez Canal zone with the Royal Electrical and Mechanical Engineers from 1951 to 1952, for which he earned the General Service Medal.

As well as his work with the Poppy Appeal, he has also raised £10,000 for the RAF Wings appeal.

Mr Hughes also collects regularly for the 1940 Dunkirk Veterans Association and the Royal Air Force Benevolent Fund and visits schools to talk about the Legion’s work.

“Young and old, everyone in Henley knows Brian, especially when poppy day comes around, when he fastidiously pounds the streets of Henley collecting money. Come hail, rain, snow or sunshine, Brian was there collecting money until 2016. I think he had to be forced to take lighter duties due to advancing years and ill-health.

“Brian also visits schools in our community and takes time to explain to young people the background and the aims of the Royal British Legion.

“He continues to carry the standard at the funerals of ex-service personnel and has done so for almost 20 years. If that was not enough, he is also a fantastic human being, full of warmth, humility and kindness.”

Mr Green paid tribute to Mrs Hughes, saying: “I’m sure you’ve heard the expression ‘behind every good man is a good woman’. It was never more true than in Brian’s case. There is no question that on those cold days and nights, when Brian was standing in the square or out collecting, Ursula made sure he had his vest on and when outside Starbucks he would have a flask with warm coffee.

“Although she’s not here physically, she is with us in spirit through the presence of Brian and their daughter.

“There is no doubt that Brian is a true son of Henley-on-Thames. We’re proud that he is one of the absolute bastions of society here. He is well known and loved by everybody. We hold him in great esteem.”

Mr Harwood said: “Not only is he unstinting in his commitment and dedication to fund-raising, he also takes time to speak to and educate the younger generation about the history and aims of the Royal British Legion and the Poppy Appeal and their role in society.

“He regularly gives talks to schools in the local area and has taken it upon himself to coach and mentor young air cadets in drill and protocol to enable the Royal British Legion standards to continue to be paraded.

“His efforts to honour the fallen are unparalleled — every inch an old solder in turnout, bearing, dedication and determination to carry out his role well beyond the call of duty. He has undoubtedly contributed hugely to the wellbeing of his community.”

As Mr Harwood pinned the medal on to Mr Hughes’s jacket, the crowd gave him a standing ovation.

A reception was held after the ceremony where a toast was given by Mr Mason and Mr Green led a rendition of For He’s A Jolly Good Fellow.

Mr Hughes said: “It’s all been very overwhelming but I am very proud.”

Mrs de Tisi said: “It’s a proud day for us and we had no idea it was going to be like this. His friends have done him proud and he will be on cloud nine for ages.”