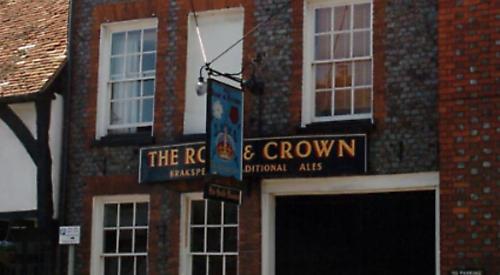 BRAKSPEAR has won its fight to use a former Henley pub as a residential property.

It marks the end of a three-year saga over the future of the Rose and Crown in New Street, which is Grade II listed.

The pub closed in August 2013 and the company applied for consent to convert it into a six-bedroom house but was turned down by South Oxfordshire District Council, the planning authority.

Brakspear then appealed but the decision was upheld.

In October the council issued an enforcement notice ordering that the site should not be put to residential use and Brakspear appealed again.

Now the Planning Inspectorate has granted the appeal and quashed the notice.

Inspector Simon Hand said the continued use of the building for residential purposes would “not harm the vitality and viability” of the town centre and would preserve the character and appearance of the conservation area.

Brakspear chief executive Tom Davies said: “We’re pleased that the right decision has been reached and we now look forward to doing something with a building that has being sitting pretty unused for quite a few years. The pub closed in 2013, having had many, many people lose money on it, including ourselves, and it’s great that finally someone has seen sense that it doesn’t have a future as a pub.”

Mr Davies said the company had always said the pub’s size and nature meant it wasn’t viable and claimed the legal process had been an “unnecessary waste of time”.

“We don’t like closing pubs — it’s our business,” he said.  “But what we want to be able to do is close pubs that don’t have a future and invest in those that do, giving people high-quality choice of where to eat and drink.”

He said the long-term plan for the Rose and Crown would be turn it into “a quality residence”. “I’m not sure at this time if we’ll be developing it ourselves or selling it and using the money to invest in other pubs that have a viable future,” he added.

Mr Davies said the company had housed some of its staff at the former pub but it was not currently being used for accommodation. In his decision notice, Mr Hand said he had seen a leisure needs assessment that had been updated since it was seen by the previous inspector.

He said: “This presents a rosy picture of the town centre and points out that it has a thriving and vibrant drinking and eating culture which is well catered for by chains and independents and this makes an important contribution to its overall vitality and viability.

“The recommendations for Henley are to provide for a much smaller amount of retail floorspace than was previously thought necessary and no recommendation is made for a specific increase in food and drink floorspace.

“The council argues that because the town centre is buoyant, there is bound to be a strong demand for the pub to re-open, or for a different operator to take it over. I agree with the appellant that this need not necessarily be the case.

“The previous inspector was faced with a situation where the local plan was based on figures suggesting considerable pub growth in the town centre was required and in that case the loss of a pub would not support the policy to identify additional leisure floorspace.

“It now seems there is a less pressing need to expand the leisure uses in the town centre.” Mr Hand said Brakspear had concluded that the Rose and Crown was not viable as a pub, restaurant or café due to its location and the physical constraints of the property, which was narrow with a small front room, back bar and “tiny” kitchen.

“Similar issues affect its conversion to retail or office space, particularly as it is a listed building,” he said. “Having visited the site, I can appreciate the problems.”

“It is also located outside the main centre of activities for the town. New Street is predominantly residential, with no retail or leisure uses beyond those close to the junction with Bell Street.

“I would agree with the viability report that there is therefore likely to be very little passing traffic down New Street which would not make the site of the pub attractive commercially.

“It is difficult to see how the loss of this small and relatively peripheral building can have any effect on the vitality and viability of the town centre.

“Although it remains a very attractive street lined by historic buildings, New Street is clearly not now a part of the vibrant market town character.

“The use of the building as a dwelling would therefore preserve the character and appearance of the conservation area.”