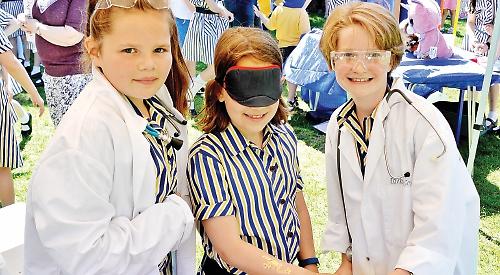 PUPILS at Rupert House School in Henley played games at their May fair.

An obstacle course was set up in the grounds of the independent school in Bell Street and there was also a water pistol shooting range, a ball-throwing stall with targets and plastic tunnels to crawl through. Prizes include chocolate, sweets and giant cuddly toys.

There was also a stall where staff stuck their face through a board painted with the children’s character Spongebob Squarepants while pupils threw wet sponges at them. Headmistress Clare Lynas and music teacher Jennie Baxter were among those who volunteered to get a soaking.

Children dressed as doctors ran a game called “Gory Kevin” in which players were blindfolded then stuck their hands inside a dummy of a “patient” and had to guess which objects were inside.

A group of parents sold balloons in aid of the We Love Manchester Emergency Fund. Organiser Lauren Connolly, whose children Ava, 11, and William, six, attend the school, said: “This is a fun day which gives the children a chance to relax before the half-term holiday after all the hard work they’ve put in. Everyone works so hard to make it a success.”