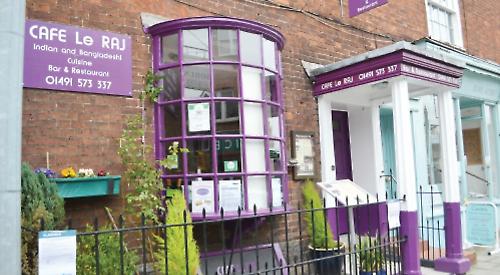 A RESTAURANT in Henley has again come under fire over its attempt to secure retrospective planning permission for a food store.

Cafe Le Raj in Reading Road installed the white uPVC-clad store at the back of its premises before applying for consent.

Now the plans have been amended to “re-orientate” the store and reduce the height of the building but residents and town councillors have again complained.

Sue Turner, who runs the Candela hypnotherapy clinic next door and lives on the premises, said: “In the original plans that were granted for a kitchen extension it was stipulated that the garden should not be used.

“Last summer we saw the builders clear the garden and lay a huge piece of concrete over a deep trough they had dug. I and other neighbours were concerned at the time and contacted district council planning about it.

“The builder was very secretive about what was happening there and the next thing we knew there was a large white plastic shed with electricity connected.

“The kitchen staff at Cafe Le Raj use the whole garden as a kitchen, which is disruptive to residential neighbours using their gardens.

“The shed is obviously used as a food store. We see the staff going up and down all evening with open trays of food. The door is usually left open and this will attract all sorts of vermin into the garden.

“We already have to put up with restaurant kitchen noise as their kitchen door is always open.

“The owner and manager of Cafe Le Raj have already shown that they have no regard for listed building regulations or their neighbours. From past experience I do not think they will change.”

She described the food store as an “eyesore”, saying: “A couple of years ago I was told quite categorically by South Oxfordshire District Council that I would never be allowed to install a small office-type cabin in my garden as I am in a conservation area and live in a listed building.

“Cafe Le Raj is part of the same building since it was terraced into small shops 100 years ago.”

Charles Langler, who lives in Queen Street at the back of the restaurant, said: “Regarding the proposed alterations to the shed, I believe that these will have little effect in reducing the visual impact for me and will have no effect at all on the many amenity, operational and public health risk problems highlighted by other objectors.

“No attempt has been made to acknowledge or answer any of these serious problems.

“I believe the shed should be removed entirely and the trees replaced without further delay.”

Henley Town Council’s planning committee has recommended that the application is refused on the grounds of overdevelopment, light and noise pollution and unneighbourliness.

Mayor Kellie Hinton said: “There are million of words that could describe how bad this is and the impact on the neighbours. It’s absolutely ridiculous.

“I propose that we put pressure on South Oxfordshire District Council to do what they’re supposed to do to protect our town.

“They have been contacted several times by several people. They need to come out and see why we’re so unhappy.”

In February Councillor Hinton called for the restaurant to be closed down for being “unneighbourly”.

She spoke out after hearing how its new outdoor extraction system had made life a misery for Mrs Turner, who said it was “ghastly” and “rumbled like a ship’s engine”.

The district council has refused planning permission for the system and is now carrying out an enforcement investigation.