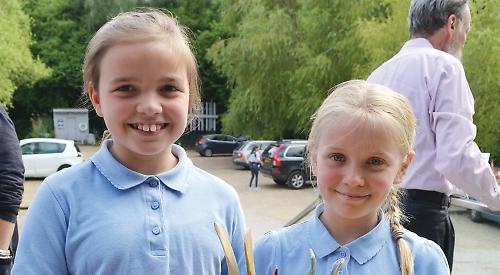 CHILDREN from Sonning Common Primary School have been crowned the winners of this year’s Henley Schools Environmental Science Competition.

The youngsters from years three, four, five and six created a time lapse video analysing the impact that pupils have on two areas within the forest school’s grounds, encouraging them to care for their environment.

They pipped children from St Mary’s School in Henley, who made a slide show about their Plants and Pollinators project, which saw the children collect samples of pollinators and plants and make counts of the number of pollinators in areas like Trinity churchyard.

Sonning Common were awarded the trophy and a cheque for £700 by Mayor of Henley Kellie Hinton at a ceremony at the town’s River & Rowing Museum on Wednesday last week, while St Mary’s received a cheque for £500.

It was the sixth time the biennial competition had taken place, and organisers Henley in Transition hope to hold it annually in the future.

Chris Hirst, headteacher at Sonning Common, said his school last won the contest in 2011 and was delighted to win again. “I’m elated. The children worked so hard,” he said.

The school wanted to encourage the youngsters to look more closely at the environment in which they live.

Mr Hirst said: “We try to use the whole grounds to educate the children. We encourage wildlife to share our grounds. We grow fruit and vegetables in our organic garden so the children can see where the food comes from.”

The school also grows indigenous species, such as English bluebells, in its grounds and has bird and bat boxes on site and even created a “bug hotel”. It also runs potato and sunflower growing competitions.

Mr Hirst added: “The Henley Schools Environmental Science Competition is a very local competition and I don’t know why other schools don’t enter it.”

Councillor Hinton, who also chairs Henley in Bloom, said: “I want to understand more about why this campaign is so important and finding out about how Henley in Bloom, and the wider community, could be part of it in the future and keep it going.

“Locally we have so many environmental issues affecting us — pollution, traffic and transport issues. We need to ensure our future adults have the kind of enthusiasm to tackle these issues. It really does start in your classrooms and back gardens and with competitions such as this.”

She said the school’s projects were “inspirational” adding: “I’m very proud and honoured to be Mayor of a town that supports and encourages future scientists.

“I’m really looking forward to seeing what other schools come up with for the next competition.”

Competition co-ordinator Patrick Fleming, of Henley in Transition, praised the quality of the two entries.

He said that St Mary’s made good use of both Mill Meadows and Trinity churchyard for its Plants and Pollinators project and engaged with the Centre for Ecology and Hydrology near Wallingford to help them learn the methods that are employed by scientists to collect and analyse data.

Mr Fleming said that Sonning Common’s project was “engaging” because of the way it involved all the children in the school and the neighbouring Bishopswood Special School. When judges visited the Grove Road primary they were taken around the two outdoor teaching areas by year six children and watched how year two children interacted during an outdoor lesson.

Mr Fleming added: “Henley in Transition are very keen to support and co-ordinate the competition. It meets our objectives of raising awareness of sustainability and community in Henley and the surrounding area.

“At a time when adults are under time and financial pressure, we see that school children can be a powerful voice for ideas that will help to shape their lives and their future. Education, environment, community — those are the values we want to promote through the town, through schools and through business.”

He thanked the Thamesfield Youth Association, the Henley Educational Trust and Henley Town Council for their contributions to the prizes.