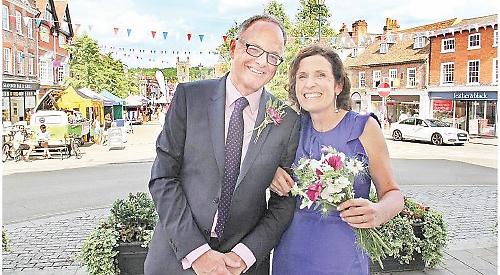 A COUPLE are to drive a van full of musical instruments to Slovenia for their honeymoon.

Mandy Beard and David Sadler, who were married at Henley town hall, are members of the Henley Symphony Orchestra, which is to perform at the 22nd Bled music festival on July 8 as part of a cultural exchange between the twin towns.

The Sadlers offered to transport some of the bigger instruments on the 1,000-mile journey while the rest of the 50 musicians will fly.

Mr Sadler, who plays the cello, said: “Henley has been twinned with Bled for a few years and I think this is one of the first cultural exchanges.

“The orchestra was invited to perform at the Bled summer music festival, so we offered to drive the instruments.

“We will be taking a large van and it will be full of violins, horns, violas and a double bass — most of the bigger instruments. It will be all the instruments that are difficult to take with you on a flight.

“I joke about this being our honeymoon but we are going to be staying on in Slovenia before travelling back.”

The couple, who live in Greys Road, will leave Henley on Wednesday and expect to travel for three days, stopping off in France, Germany and Austria.

After performing with the orchestra they will go walking in the Julian Alps for five days before cycling to the Slovenian coast for a “wines and vistas” tour and a couple of days’ rest.

Mrs Sadler, who plays the violin, said: “David has promised me that the cycle ride is downhill!”

They will make their way home by train, “eating good food” along the way, while the instruments will be driven back to Henley by other members of the orchestra.

Sixty guests attended the wedding ceremony, which was held in the council chamber.

The couple were welcomed with a performance by a nine-strong string ensemble, comprising family, friends and members of the orchestra.

Concert pianist Anita D’Attellis, from Henley, played during the signing of the register.

Mrs Sadler carried a bouquet of flowers from her own garden, comprising cosmos, love in a mist and orlaya grandiflora.

After the ceremony, guests were taken by coach to the reception at the Greyhound pub in Peppard, which is run by celebrity chef Antony Worrall Thompson and his wife Jay, where they had a three-course meal and a small jazz band performed. Mrs Sadler had made a fruit cake with tiers of French cheeses.

Mrs Sadler grew up in Scotland and moved to Henley in 1995 after living in London and Switzerland.

She studied at the Open University in Oxford and has held various jobs locally, including at Gillotts School, the River & Rowing Museum and the Henley Festival. She ran music activities for children at the Henley Youth Festival for many years and also the music exchange to Leichlingen in Germany, which is also twinned with Henley. She also reviews music for the Henley Standard.

Mr Sadler was born in The Hague, Holland, and moved to England when he was six to attend boarding school. He later lived in Germany, Manchester and Princeton, USA, en route to settling in Henley at about the same time as his wife.

He is a trained chemist and worked for Syngenta, a biotechnology company, as their global head of formulation. He now works as a management consultant. The couple met through the orchestra and bonded over their shared love of music and the outdoors.

Mr Sadler said: “The thing about Mandy is her kindness, her love of life, her desire to always to take on new things, her creativity and musicality and her love of her garden and the outdoors.

“On our wedding day she even arrived early and, for those who know her, that is not common.”

Mrs Sadler said: “David has a great sense of humour and is a very emotional guy. We had a few tears at our wedding and that is what I love most.

“He bares his soul on his sleeve and we have so much in common.”