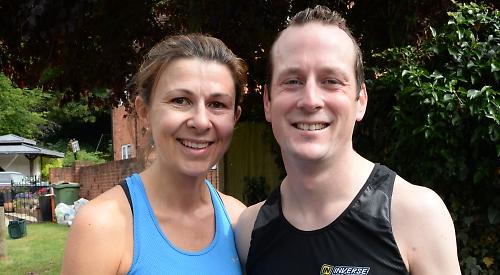 The 5km run around the perimeter of 40 Acre Field was held on Saturday and will be repeated weekly.

The runners were set off by Henley Mayor Kellie Hinton and her daughter Hallie, six, with fellow town councillors Dave Eggleton and Julian Brookes.

They took on two loops of the course, which also included a short out-and-back section of the Pack and Prime Lane bridleway and a steep hill. The first person home was Richard Price, of Wootton Road, Henley, who is a member of the Henley Harriers running club and has taken part in about five Parkruns elsewhere.

“It was great fun,” he said. “There was a great atmosphere and it’s awesome that Henley now has a Parkrun. Lots of people are getting out and getting fit.” His wife Gillian, who also took part, said: “It was really enjoyable, although the hill was hard!”

Peter Hopkins, a solicitor with Mercers in Henley, said: “It’s really different from other Parkruns because of the hill and there are quite a few tree roots to look out for! The path was quite narrow but the views from the top of the hill were really amazing.”

The Henley event has been set up by Parkrun member James Barr with support from Henley Town Council, South Oxfordshire District Council and the Sue Ryder Foundation.

Mr Barr said: “At last it has all come to fruition. It has been two years’ work which has resulted in a new sporting addition to Henley’s tradition. The run went very well. There was a very happy atmosphere and people were excited and pleased to be doing a different type of Parkrun.

“ This is a trial run and quite challenging and we were delighted with the turnout.”

Anyone interested in volunteering for the parkrun should email Mr Barr at james.barr1@ntlworld.com or send a text to 07958 426638.