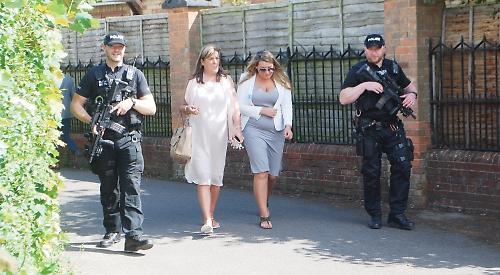 ARMED police were present at this year’s Henley Royal Regatta, helping to ensure it went off without incident.

Tens of thousands of people descended on the town for the five-day rowing extravaganza, which ended with finals day on Sunday when five race records were broken.

As usual, the banks were a sea of colour thanks to the women in their summer dresses and men in rowing blazers while on the water spectators were in all types of boats, from traditional wooden craft to motor cruisers and huge “steamers” to hired rowing boats and fun-themed vessels.

The weather kept improving, going from overcast on the opening day to bright sunshine on Sunday.

Up to 150 police were on duty on Saturday and officers armed with automatic rifles were drafted in as the regatta stepped up security following the terrorist attacks across the country in recent months.

Officers with sniffer dogs patrolled the bank and a high-speed police boat with armed officers was on the water.

Bag searches were carried out at the entrances to the enclosures and queues of people formed outside the boat tent enclosure as security staff wearing latex gloves made checks.

Despite the increased security, the atmosphere at the 178th annual event was, as usual, good-natured and even the armed officers posed for pictures with visitors.

The spectators included Prime Minister Theresa May, whose Maidenhead constituency includes the regatta site, who was in the stewards’ enclosure with her husband Philip on Friday.

On Friday, Henley Bridge became so busy with people walking to the regatta that Oxfordshire County Council staff had to stop the traffic to allow the pedestrians to use the road.

A section of the towpath between the regatta enclosure and Upper Thames Rowing Club was closed due to the number of people and spectators had to walk along Remenham Lane to get nearer the start line.

At least two people took an impromptu dip in the River Thames.

On Thursday, a member of Oxford University Boat Club capsized while attempting to attach his scull to the stake-boat at the start line. Matthew O’Leary, a former Blue, recovered in time to race in the Diamond Challenge Sculls but was beaten.

On Saturday a woman fell off a spectator boat while taking a photograph but was pulled back on board to safety by her companions.

A Hurricane from the Battle of Britain Memorial Flight performed a fly-past over the regatta course on Saturday lunchtime and on Sunday there was a row past of the Queen’s row barge Gloriana by students and alumni from Pangbourne College to mark the school’s centenary.

A total of 577 crews entered the regatta, the second highest total ever after last year’s record of 629. These included a record 60 American crews but none of them went home with any silverware.

The winners included Will Satch, Henley’s own gold medallist from the Rio Olympics, who won the Stewards’ Challenge Cup in a composite crew with fellow Leander Club athlete Matt Rossiter, Molesey’s Moe Sbihi and Mat Tarrant of Oxford Brookes.

Leander Club also claimed wins in the Princes of Wales, Queen Mother and Visitors’ Challenge Cups — the last after an anxious 30-minute wait while the stewards considered an appeal from the losing crew from Cambridge University.

Leander athlete Vicky Thornley, who won a silver medal in the women’s double sculls in Rio, was surprisingly beaten by Germany’s Annekatrin Thiele in the final of the Princess Royal Challenge Cup for single sculls. Shiplake College’s eight made it to the school’s first semi-final in 27 years in the Princess Elizabeth Challenge Cup before losing to Radley College on Saturday.

Headteacher Gregg Davies said: “I had a word with my boys after the race as I was so proud of them. I said to them, ‘if you had asked me at the beginning of the regatta, where do you want us to be, I would have said Friday would be great, Saturday would be amazing’.

“They have done Shiplake and their parents proud. If there was a better word than pride, I’d say it.

“Of course we’re disappointed but what they have done is tremendous for a small school.”

Henley Rowing Club’s girls made the semi-finals of the Diamond Jubilee Challenge Cup for quadruple sculls. There were also three new women’s events this year.

Regatta chairman Sir Steve Redgrave praised the quality of the racing at the prize-giving ceremony, where the cups were presented by Helen Glover and Heather Stanning, who won gold in the women’s coxless pairs at the London and Rio Olympics.

“Over the five days we have had 310 races. Over the first four days we had two new Fawley records and one to the barrier and five equalling old records.

Sir Steve also praised the organising team, saying: “There are so many people that bring this event together.

“We have a small but highly professional, brilliant team that works all year round but running the regatta itself is very much down to the volunteers.

The chairman said the live broadcasting of the regatta had been taken to “another level” this year and said the event had been promoted to an even wider audience thanks to the regatta’s first ever official partners, men’s outfitters Hackett, Aston Martin and Henley watch manufacturer Bremont.

He also said the regatta’s planned new family enclosure on Fawley Meadows was “not quite there yet” but would be a “great addition”.

Glover said: “It cannot be understated what a huge honour it is for Heather and me to be here and to present the trophies.

“Watching from the banks it has been inspirational to see the standard that people are rowing at. Whether you are one of the winners receiving trophies today, or whether you are somebody who made the start line you can be sure you have been part of the most famous regatta in the world.”

She welcomed the new women’s events, saying: “The pride that I saw on the faces of the women that got to row down this Henley course in their respective events I will never forget, so I just want to say congratulations to all you women.”

Stanning said: “How great it is to be able to sit in an office and be able to watch Henley on YouTube. Luckily, I don’t think my boss is here so I might get away with it! It shows how far spread this regatta is becoming.”