All Saints and Mel C combine to close Henley Festival 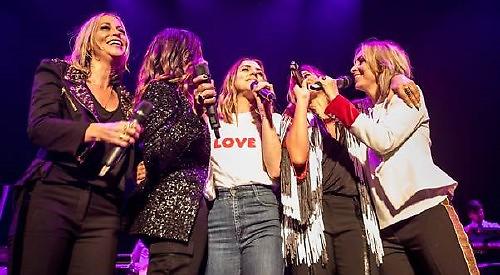 ALL SAINTS and Mel C took the crowd back to the Nineties on the closing night of the Henley Festival.

The girl band and former Spice Girl combined for a rendition of Pure Shores, All Saints’ 1999 number one, to finish the show.

Throughout both sets the crowds sang along, waved their arms and jumped around.

The group, who all wore black and white during their hour long set, played a number of their hits including Never Ever, Lady Marmalade and Black Coffee.

Nicole Appleton, who had a house in Henley until 2014, told the crowd: “Thanks for having us, I used to live in Henley and I absolutely love it here.

“You guys are lucky to have this festival and we are honoured to be here. I could do this all night.”

Earlier in the evening Mel C brought a group of girls from the crowd onto the stage to dance while she performed Say You’ll Be There, a number one for the Spice Girls in 1996.

Her set, which lasted 45 minutes, also included covers of Ed Sheeran’s Shape of You and Sia’s Cheap Thrills.