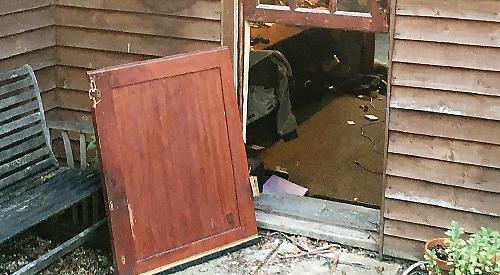 THIEVES broke into a video production studio in Henley and stole £30,000 of equipment.

The culprits smashed through a door, breaking the lock and then trashing the office as they stole camera equipment and computers from Meadows Farm Studio, off Marlow Road.

Owner Richard Pinches, 52, and his partner Liz Howard were asleep upstairs when they heard the intruders break into the company’s editing suite at about .

He said: “We were alerted when the intruders violently tried to break into our flat at It was a very violent attack on the door, which was locked, the lock held but the frame gave way and the door’s window was smashed.

“We were awakened with a jolt. We shouted at the attackers and I saw two people run away. They tried to break into the flat, which is disturbing, but luckily the door is very strong and they did not get in.”

Other equipment taken included , other camera accessories and a brand new Phantom 4 drone.

Mr Pinches, who was born and bred in Henley, started the business in 1988, which rents out studio space and equipment at its base next to Fawley Court. He also offers photography, video production, aerial filming and motion control services. Some of his previous clients include the BBC, Canon, Dell, Sony and Rolls-Royce.

Mr Pinches said: “It was quite shocking to be woken up like that but also distressing to see the damage they had done trying to get in.

“Liz phoned 999 immediately and the police were here within a few minutes. The police commented that the stable door had ‘put up a very good fight’ but ultimately it gave in.”

Mr Pinches and Ms Howard, the company’s film and media director, have been able to carry on working despite the break-in, which took place on June 7. Later that day they completed a food shoot in the studio.

Mr Pinches said: “I had enough equipment to keep shooting but it was difficult because we had been awake since and the client arrived at for the shoot.

“We had police and crime scene investigators coming in and we had to try and order replacement equipment as we had a job on Friday then a job in Italy the following Monday.”

Ms Howard said: “It was rather nasty and unexpected. We have never been burgled in 29 years and we have had lots of different people through the years coming through coming and going all the time.

“We will have to replace everything that was stolen but our business is very strong, our clients are very supportive and, bar a few inconveniences, it’s business as usual.”

Mr Pinches said they did not lose any footage, as it was all backed up on the internet, or money, as the equipment was all insured.

“We had no interruption to our business but only because we were able to speedily recover and purchase replacement kit,” he said.

“As we were doing the job in Italy and my partner did not need the use the editing units. The new machines had come by the time we were back.”

Mr Pinches thinks video equipment was being targeted as it was expensive and easy to sell on.

He said: “The camera kit is small and high value. It’s very annoying. My family have said they are scumbags and other things you can’t print.

“We are a very small business and it can have an impact on you, we managed to recover.”

Mr Pinches understands two other video production companies locally have been targeted in similar attacks. He said: “I have a business with a very high internet presence but the two others were off the radar and you could not find them with a Google search.

“They were very clearly targeted. Some of the stuff taken from one of my friends was unique. He had adapted equipment you could not buy anywhere else.

“My stuff was very generic and the other incident was fairly generic equipment. The police have the serial number for my equipment that has been registered somewhere so it can be picked up.

“I think the police are following up a couple of leads. I think they have automatic number plate recognition footage.”

A spokesman for the police said: “We are conducting an investigation into the burglary, including scene visits, house to house enquiries, witness statements and obtaining and viewing CCTV.

“The burglary is being linked to other offences in Northamptonshire and West Mercia.

“If anyone has any information please call the force on 101 or visit your nearest police station and quote reference 43170164563.”