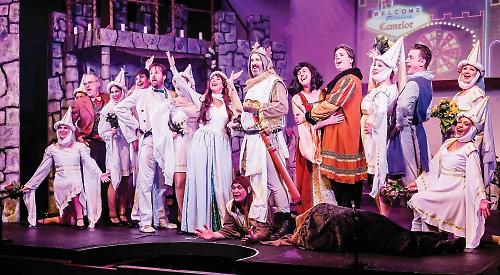 HENLEY Amateur Operatic and Dramatic Society has scooped a national award for its production of Spamalot.

The society staged its version of the Monty Python classic in October 2016, with the production directed by Lloyd White, choreographed by Emma Jane Taylor and musically directed by Mark Webb.

Mr Balmford said: “Being part of such an incredible show and great cast was so much fun and an enormous privilege. Winning the award was the icing on the cake.

“I was blessed to be a part of this show with a group of people who made me laugh every time we were together.”

Mr White added: “The Spamalot script is hilarious and draws on decades of Python genius, but to do it justice requires 100 per cent commitment. Counter-intuitively, the final product is only really funny when every actor is taking it totally seriously.

“My cast gave 100 per cent, they didn’t play it for laughs and the result was a truly memorable and genuinely funny evening. I couldn’t be more proud of them and this award is to their hard work and commitment.”

HAODS’ next show will be A Chorus Line at the Kenton Theatre, in New Street, in November.