Life-savers out of date 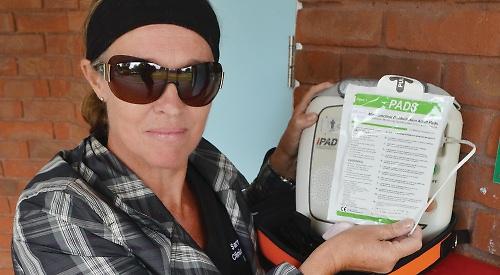 MORE than half of the defibrillators in Henley and the surrounding area are at risk of failing and must be replaced as soon as possible.

That’s according to the Millie’s Dream charity which has installed 55 of the devices since 2013.

A Henley Standard investigation has found defibrillators so low on battery that they display a red warning light. This means that the device may not have enough power to deliver a shock to the heart that could save someone’s life.

In other cases, the pads used to stick to a casualty’s chest have become non-adhesive and are a year beyond their use-by date.

Sarah Roberts, who founded the charity after her daughter Millie, who has a heart and lung condition, described the situation as a “crisis”.

In Henley town centre, two defibrillators display warnings that the batteries, which have a lifespan of about 36 months, are low and should be replaced immediately.

The device in Market Place, outside the HSBC bank, also has pads that should have been replaced almost a year ago, while the pads in the one outside Rupert House School in Bell Street went out of date last October.

Elsewhere, the defibrillator at Valley Road Primary School has a low battery and its pads went out of date last August.

At Gillotts School, the pads for children expired a year ago, with the ones for adults going out of date in September. A gauge on the device says the battery has 60 per cent power.

At the Leichlingen Pavilion in Mill the defibrillator attached to the building has a full battery, but the pads should have been replaced in April of this year.

At Harpsden parish hall the pads should have been replaced in February and, although the battery reads as full, it was manufactured in January 2014, well beyond the 36 months’-life expectancy.

Outside Henley, the Peppard Primary School device has a low battery and, again, the adhesive pads have reached the end of their life spans last August.

Miss Roberts, who lives in Kidmore End, is appealing for volunteers to check the devices nearest them.

She said: “I was greatly saddened and deeply concerned a few weeks ago when I did a routine check of the defibrillator in central Henley and discovered that it was out of date.

“This could mean, in the event of a cardiac, arrest the device may not be able to generate a shock.

“If the adhesive pads have worn out the electricity could just shoot across the person’s chest and be of no help to someone having a cardiac arrest.

“Once you have put it on, it’s then got to work for quite a while before the paramedics arrive. It issues a shock and then what you don’t want is in the middle of a cardiac arrest is the battery to go.

“More than 50 per cent of them are out of date. It’s a crisis because they are simple to use, , but totally useless in the event of expired batteries or adhesive pads.

“I’m obviously very, very saddened that the devices that the community have worked so hard to donate their funds to, to in their schools, sports clubs, or villages, may actually be no use because there’s nobody long-term managing them.

“It could mean that someone in your family, friends or child’s school will have a sudden cardiac arrest and it’ll be fatal because the defibrillator’s not working.”

She added: “I’m here to support these communities, it’s not about blame. In the excitement of the the management side of it wasn’t fully appreciated and it’s now the management that I need help with from the communities and schools.”

Millie, 10, who is a pupil at the Oratory School in Goring Heath, was born with tracheobronchial malacia, a narrowing of her windpipe, and was subsequently diagnosed with paroxysmal atrial tachycardia, an electrical malfunction of the heart which in severe cases may be life-threatening.

After researching the condition, Miss Roberts bought the family an automated external defibrillator to have at home.

But, following the story of footballer Fabrice Muamba suffering a cardiac arrest on the pitch and surviving thanks to a defibrillator, she decided to launch the appeal.

The charity has installed the defibrillators in Henley, Peppard, Nettlebed, Toker’s Green, Wargrave and as far as Crowmarsh Gifford, and Miss Roberts hopes to reach 60 by the end of this month.

The latest was unveiled in April at the Henley 60+ Club in the Greys Road car park and they are in talks with Upper Thames Rowing Club after a veteran rower died there after training last month.

Miss Roberts said: “The response of local people has been absolutely fantastic. There’s been massive support and what I think it has highlighted to the community is the necessity.

“But we’re still a one-and-a-half-man band, the half being Millie!

“Due to work and family I am unable to look into all the defibrillators and ensure their batteries and electrodes are date.”

Miss Roberts is also asking for more donations. It will cost about £100 to replace a single defibrillator’s battery and pads if required.

The charity will donate money if there are sufficient funds but Miss Roberts is asking communities in which the devices are located to help out.

In Stoke Row, Ross Brawn, Formula One managing director of motorsports and former team principal, and his wife Jean have paid for replacement batteries and pads for the village’s two machines.

Miss Roberts says she needs communities to “take ownership” of their devices.

She said: “There are people in the community who are aware, but not enough. People think arrest is something that happens in the elderly, but we’re losing 12 young people a week.

“I witnessed a collapse the other day in the Henley area where a defib was to hand, but what was really shocking was that it wasn’t used. She was unconscious for 15 minutes but survived.

“Even though I was standing there with a Millie’s defib nobody felt confident enough to put the device on. The individuals around were so terrified that they would do something to make this situation worse.

“Not only are the defibs out there but we need to make sure they are in date. We absolutely need to know people have got the confidence to use them.

“I think it just highlighted to me that, even with all my experience of the charity, Millie’s own heart condition and all the education we’re trying to put into schools and communities, there’s a fundamental fear and that’s where we’re so far behind our European counterparts.

“It can be anyone aged 0 to 100 that can have a problem because this is a rhythm problem, not a health problem. Without a you have a five per cent chance of survival. CPR alone will not restart the heart, you have to have the electrical shock. It then goes to in excess of 50 per cent with the use of a defib.

“We want the widest coverage for every device that’s put in place and we have a couple of hot spots in Henley that are without cover, for example, the shops at the top of Greys Road.”

Miss Roberts added: “Millie’s the inspiration behind the charity and I think she feels like I do. We don’t want people potentially having fatalities because communities are not looking their gifts.

“The defibrillators from Millie’s Dream are a gift of life and in order to preserve life we need to make sure our devices are safe and up to date.”

If you can help Miss Roberts by checking a defibrillator call 07733 318993 or email sarah@active-viii.org