Mayor's party in the park 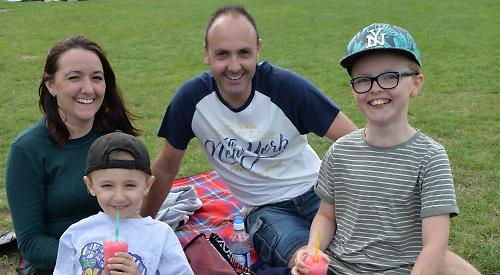 HUNDREDS of families celebrated the start of the school summer holidays at the inaugural Mayor of Henley’s Party in the Park.

Councillor Kellie Hinton said she was delighted with the success of the event, which was held on Mill Meadows on Friday, and hoped it would become an annual fixture.

She attended with her seven-year-daughter Hallie, mother Dawn Kirby and the Mayor’s escort Councillor David Eggleton, who even had a go on the inflatable slide.

There was a range of food and drink including chilli dogs, slush drinks, candy floss and a bar.

A number of bands performed on the bandstand, including Doubt It, who played cover songs by Oasis, the Arctic Monkeys and Franz Ferdinand.

The rain held off until towards the end of the party in the early evening.

Councillor Hinton, who took office in May, said: “It was good to have an end-of-school blowout and I think it went really well. People were so excited.

“Before I’d even opened it people were making use of the stands and the slide and families were coming and going the whole time. It was just lovely to be down by the river, which is my favourite place in Henley, with live music and a bit of life and soul.

“Usually at the end of term parents take their children down to Mill Meadows anyway so this just gave everybody a bit more reason to go and have fun.”

The event raised more than £600, which will be split between the Mayor’s chosen charities for her year in office — Valley Road, Sacred Heart, Badgemore and Trinity primary schools.

Cllr Hinton said: “We weren’t trying to compete with any other event in the town, it was just to earn a bit of money for the charities and have fun.

“My year as mayor is all about the next generation of Henley and I just wanted something really fun that kids could get involved in. They’re the people who are going to run the town in future.

“I think we catered for everybody and the feedback has been really good.”

Beatrice Friend, from Henley, who attended with her daughters Tilly, three, and 18-month-old Phoebe, said: “There’s a great atmosphere, especially being the last day of term. The party’s a great idea.”

Sophie Camburn, who was with her daughter Rose, six, who attends Trinity primary, said: “It’s nice because it’s the end of term so all the kids have a sense of fun and it has brought everyone together.”

Lisa Pell, who was with her seven-year-old daughter Roxi, said: “We just love the park so it was a good excuse for everyone to get together. It’s a brilliant idea and I hope it happens every year.

“Henley has always been beautiful, of course, but we need something for the children because they are our future.

“I think Kellie’s going to do a fabulous job, I really do.”

Rebecca Quinn, who was with her daughter Niamh, eight, said: “School’s out! It’s the end of term and it’s great catching up with friends.”

The afternoon also included a raffle with prizes donated by local businesses and attractions.